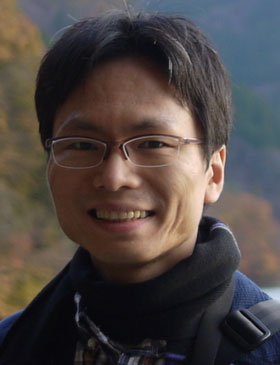 Born in 1975 in Seoul
Studied Life Sciences at Kyoto University, Physiology and Biophysics at the University of Washington, Seattle, and Physics at Pohang University of Science and Technology (POSTECH)

The SCN, the Hypothalamus, and the Cortex: How the Clocks in the Brain Regulate Sleep and Mood

The brain's endogenous circadian (~24h) clock is the rhythmic driver of daily homeostasis. Disturbed brain homeostasis is symptomized by disturbed sleep patterns, which can lead to mood disruption. Both imbalance in brain physiology via a neurotransmitter switch and internal desynchrony of circadian rhythms have been associated with abnormal mood states. Brain homeostasis may be a summation of local homeostases in various regulatory circuits. However, a larger theoretical framework to connect the circadian clock with sleep and mood has been missing. The brain houses multiple circadian oscillatory systems, including the master clock in the suprachiasmatic nucleus (SCN). Circadian rhythms govern homeostatic gene expression in individual neurons and a loss of temporal coordination among brain regions can contribute to physiological imbalance. Coordination likely depends on network interactions on at least two scales, as each brain region consists of local neural circuits, and there is a global communication among them. We have previously shown that the phases of circadian oscillations in the SCN reorganize in accordance with seasonal day length, by balancing attractive (synchronizing) and repulsive (desynchronizing) coupling among the oscillators. This feature of the SCN circuit may replicate to the global brain to mediate the emergence of organized circadian phases, as occurs, for example, in the arousal system. Although sleep regulation is a phenomenon mediated by the hypothalamus and the brain stem, the sleep phenomenon itself belongs to the cortex. The mood is similarly related to the cortex as mood dysregulation leads to impaired cognition. By integrating different levels of dynamics in the SCN, the hypothalamus, and the cortex, we aim to find scale-invariant principles that underlie the brain-wide, homeostatic organization, which could provide a platform to approach psychiatric disorders such as bipolar disorder and major depression.

Philosophizing and Physiologizing on Time and Mood in the Brain

In an episode of Tetsuka Osamus "Astro Boy", the humanoid robot Astro contradicts his human-like persona by counting events with picosecond precision. He constantly desires to understand what it is like to be a human, a state he can never attain because, paradoxically, being temporally imprecise is the quintessential human experience. For humans, an instant of time is a false sensation, because our sensory modalities take a certain delay in processing qualitative information. A musical sound registers to us as a pitch only if it persists longer than 30 milliseconds. Scanning the visual field of a new scene requires our eyes to complete a saccadic cycle of about 200 milliseconds. It is only illusory to position our awareness at a precise point in time, because for us sensory data do not exist at an instant. This intuition, that consciousness is inherently entangled with time, has been noted repeatedly in philosophical discourses since Aristotle, before finally entering the realm of neuroscience through Endel Tulvings concept of episodic memory. Why resurrect old ideas in philosophy? Because it is my goal to understand mood, an inherently subjective experience that is difficult to define operationally. Is there a way to translate mood into something more tangible, what physiologists call an endophenotype?

Consciousness may emerge via temporal integration of various sensory data. These sensory data come in different timescales, and unifying them in the brain requires a common synchronizing cue. In the early days of television, it was realized that the video and audio tracks appear synchronized as long as the time difference between the two does not exceed 100 milliseconds. This requires the brains reference clock to have a precision bound in the order of 10 milliseconds, barely the operating timescale of a single neuron. In addition to being able to record and time-reference very fast events, biological clocks must also keep time across scales of hours, days, and even years. Although a pendulum or an atomic clock accumulates small periods of rhythmic cycles to keep track of time at much longer scales, a biological clock cannot achieve the same accuracy due to the intrinsic cycle-to-cycle variation of biological processes and the energy constraints of neurons. Time in the brain is therefore kept through a distributed system of multiple clocks operating at different scales. Sub-second timescale oscillations throughout the cortex are integrated and compared in the basal ganglia and the cerebellum, to enable time interval estimation at a second to minute scale. A biological clock with a timescale of approximately 24 hours is maintained in almost all cells through a gene expression feedback mechanism. A clock with a timescale of days or seasons is maintained in a dedicated hypothalamic organ called the suprachiasmatic nucleus. In the normal brain, the timing systems of different scales are hierarchically coordinated. However, internal disorganization in timing can be found in a number of psychiatric disorders with mood disorder comorbidity.

The perception of time is often correlated with the perception of mood. Several large data analyses of emotional words in real-time Twitter feeds commonly show a trend of morning increases and evening decreases in positive affect, assessed as statements of positive motivation and delight. The experience of these emotions occurs through activation of the reward system, primarily via the neurotransmitter dopamine (DA). This molecule also mediates interval timing estimation. DA is higher in the morning and moods are more positive; during these periods time is perceived as going faster. DA agonist drugs such as cocaine and methamphetamine cause a similar acceleration in time perception. Brain DA levels are reduced in patients suffering from major depression. Depressed patients perceive time as running slowly, and the expected reward value discounts slowly as well. This demotivates them to act quickly. When they do act, the reward may be already gone, which demotivates them even further. This theory, called the discounted utility in behavioral economics, provides a plausible scenario of how DA regulates mood by tweaking the perception of time. It also may explain why chronically depressed Abraham Lincoln had a far-sighted political vision.

Subjective time, which I refer to as time perception, or which Henri Bergson called "Time", is inseparable from mood, just as it is from consciousness. Nonetheless, time can be measured objectively. Studies of the relationships between biological clocks and time perception thus have substantial potential to help us understand abnormal mood conditions. Let us note, in conclusion, that Astro with his superbly precise clock will never suffer from major depression, and yet he will never be human.

The choroid plexus is an important circadian clock component