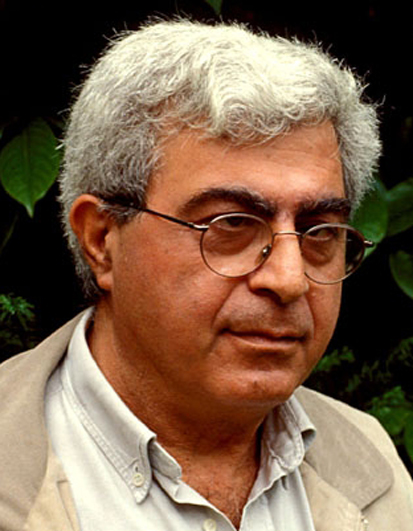 Born in 1948 in Beirut
Studied Social History at the Lebanese University, Beirut and the École pratique des hautes études, Paris

I will be working on the second volume of my trilogy The Children of the Ghetto. The first volume came out in January 2015 and is entitled My Name is Adam. This novel is a kind of continuation of my novel The Gate of the Sun; in this sense, it is a new approach to reading the Palestinian Nakba as a continuous process that began in 1948 and is still taking place in the present time.

The narrator and main protagonist Adam Dannoun was born in 1948 during the war of the Nakba. An orphan, he was found on the body of his dead mother in the fields of the march of death where the vast majority of the 50 thousand inhabitants of Lydda were pushed from their city by the conquering Israeli army. 500 remaining Palestinian inhabitants of Lydda were put in a small area enclosed by fences and given the name "the ghetto of the Arabs". Adam will be the first born of the ghetto of Lydda.
Many years later Adam is writing a kind of autobiography. In his mid-fifties, he left Jaffa, where he lived and worked as a journalist after the end of his long love story with Dalia, and came to New York City to work in a falafel restaurant.

A text about the life of the Palestinians in Israel, and a combination of memoirs, literary criticism, and reading the madness of history.
The first volume took place in Lydda, whereas the second volume will take place in Haifa, Jaffa, and Tel Aviv.
I am now working on the second volume, hoping that my short Fellowship at the Wissenschaftskolleg will enable me to finish it.

In the land of my birth : a Palestinian boyhood

In defense of metaphor

Gate of the sun Bab al-Shams

Nakba and Survival: The Story of Palestinians Who Remained in Haifa and the Galilee, 1948-1956