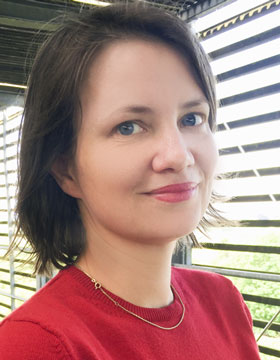 Born in 1978 in Uelzen, Deutschland
Studied Biology and Biopsychology at the Freie Universität Berlin and Cell Biology and Neurobiology at Robinson College, Cambridge University

"Tout ce qui est vrai pour le Colibacille est vrai pour l'éléphant." - What is true for E. coli is true for the elephant, Jacob Monod famously remarked about cells. Indeed, as the basic unit of life on earth, the core building blocks of cells are highly conserved across species ranging from bacteria, algae, and flies to humans. A hallmark of cells is the localization of components for metabolic activity and biochemical reactions. In animal cells, this is solved by the compartmentalization and phase separation of soluble cellular components. Another important mechanism for cellular organization is the transport of protein-coding ribonucleic acids (RNA) to specific areas of the cell. This localization of RNAs ultimately establishes protein gradients in cells and therefore can be considered a genetically encoded gradient.
The localization of RNA molecules in cells is conserved across all phyla and is thought to have contributed to the emergence of the first protocell on early Earth. Recent data suggest that RNA localization is very widespread and can affect 20% of the RNA in a given cell. I have recently made a contribution to this by showing that RNA localization is a cell-type and developmental time-point-specific phenomenon that affects specific types of RNAs.
During my time in Berlin, I intend to write a review article that integrates my findings on dynamic RNA localization in the larger scientific context. This is important because my work is highly multidisciplinary, merging computational biology, developmental biology, and cell biology. For a genome biologist, the developmental-biology aspect of my work is often not entirely intuitive and the computational analyses alienate many developmental biologists. My second aim is to computationally analyze localized RNAs and what makes them special for cells - since I am not trained as a computational scientist, the visit in Berlin will allow me to fully immerse myself in the programming aspect of my work.

The Dynamic Distribution of Ribonucleic Acids in Cells

Ribonucleic acids are highly abundant molecules present in the cells of all living organisms - in humans, animals, plants and bacteria. Moreover, ribonucleic acids are primordial entities and thought to have been pivotal in the emergence of cellular life on earth four billion years ago. The long history of ribonucleic acids (RNAs) is reflected in their functional versatility, for instance as mobile genetic molecules that deliver information from DNA into protein or in acting as scaffolds for the assembly of large protein machineries to monitor such things as which of the parental X-chromosomes should be active in women. Ribonucleic acids are also critical in transporting cargo to and from the long extensions of neuronal cells, which is essential in the formation of long-term memory, and ribonucleic acids are also positioned at the active sites of core cellular machines such as the ribosome. Even more surprisingly, depending on their location in the cell, ribonucleic acids can fulfill these diverse functions in a sequential fashion.

Despite the many interesting roles that ribonucleic acids plays, for a long time very little was known regarding its cellular distribution - a phenomenon known as RNA localization. My focus in the past has been to build up a very detailed collection of RNA in cells through the use of fruit-fly ovaries, and my monitoring of all the flys 14,000 genes across five days of development has been informed by four essential questions: 1) Which genes are transcribed into RNA and when? 2) Which specific RNA form is produced and when? 3) How are the different RNA species distributed in the ovarys various cell types? 4) How is the expression and distribution of RNA linked to protein production? All this data is summarized in an image collection containing 50,000 individual observations, several linked high-throughput sequence collections, and a table with 15,000 rows and 300 columns. In Berlin I am devoting much time to expanding my knowledge of just how to explore these data sets in a meaningful way so as to gain further insight into why certain RNAs but not others undergo specific regulatory steps such as their localization in cells.

My initial interpretation of this research resulted in several interesting findings. For example one-fifth of RNAs can adopt specific distributions within cells; that these RNAs share sequence-specific features; and of great importance, that RNAs redistribute themselves in cells in a very dynamic fashion. In my talk I will give examples of each and link my observations to the current scientific literature.

Inspired by my many conversations with colleagues in Berlin, I have also started to think about the visualization and communication of scientific results, especially in my own particular field of research. This has led to an analysis of the images used in reporting discoveries about RNA - from the beginning of this type of research, when RNAs were shown to be solid crystals, to the mid-twentieth century when it was demonstrated that RNA was merely the linear sequence of its bases, to the present day as we begin to observe live RNAs in cells along with their dynamic behavior. Provided that I have the time, in my talk I will also discuss these particular aspects of the history of RNA research.