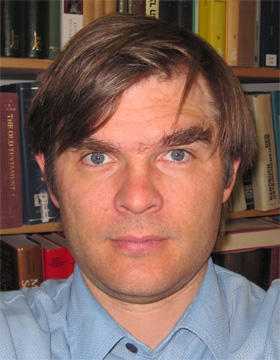 Born in 1970 in Erlangen
Studied Protestant Theology at the Universities of Bochum and Bern, and Comparative Religion at the Hebrew University of Jerusalem

Jewish-Christian relations have been a focus of much scholarly attention in recent decades. One field in which much remains to be done is the rather complex field of liturgy/ritual. While Jewish roots of Christian liturgies have been frequently discussed, this has been much less the case for interrelations between Jewish and Christian liturgies in later times, including Christian influence on Jewish practices and vice versa. Most of the study of early Jewish and Christian liturgies will be undertaken in close collaboration with my colleagues Israel Yuval and Clemens Leonhard. My thematic focus shall be reactions to Christmas in ancient Jewish literature from Late Antiquity and the Middle Ages. One of the sources will be Toledot Yeshu, a Jewish anti-Gospel / anti-Acts of the Apostles, that describes the life and work of Jesus and the emergence of Christianity from a highly polemical perspective. Many manuscripts mention a number of Christian festivals, often including Christmas/Epiphany setting them into relation with Jewish festivals. A second arena will be an analysis of exegeses of those biblical readings in Homiletic Midrashim linked to Chanukka that are also employed on Christmas and/or Epiphany. This is linked to an internet database under construction that strives to gather data on fixed liturgical readings in both Jewish and Christian liturgies from Late Antiquity and the Early Middle Ages, mostly but not exclusively in lectionaries.

An ancient list of Christian festivals in Toledot Yeshu : polemics as indication for interaction

The impact of Yom Kippur on early Christianity : the Day of Atonement from Second Temple Judaism to the fifth century Wissenschaftliche Untersuchungen zum Neuen Testament ; 163