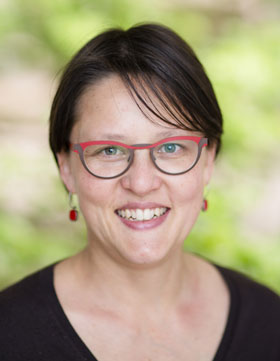 Senior Lecturer in Ecology and Evolution

The University of Melbourne

Born in 1976 in Brisbane, Australia
Studied Biology and Philosophy at the University of Queensland

Animal colour patterns and ornaments are one of the most striking manifestations of nature's extraordinary diversity. Explaining this diversity has been a fundamental motivation for generations of biologists, but there is still much we do not know. In particular, we still lack a general predictive framework for understanding the diversity and distribution of animal colouration. The proposed study will fine tune and test theoretical predictions regarding the prevalence of different cellular mechanisms (e.g. different pigment types, feather and scale nanostructures) generating colours used for sexual ornamentation. Predictions will be tested using meta-analyses of large datasets of colour patterns in different animal groups (compiled in collaboration with other members of the Wiko focus group). Examples of these predictions based on current theory include (but are not limited to):
1. colours generated by "physiologically costly" carotenoid pigments are more likely to be used as sexual signals than similar colours produced by different classes of pigment;
2. melanin-based signals in vertebrates are more prevalent in species with strong social dominance hierarchies;
3. the intensity of structural coloration is correlated with indicators of physiological stress.
The results of this study will allow us to understand how the diverse cellular mechanisms generating colourful skin, feathers and scales can explain general patterns in the evolution of animal ornaments.

Animal coloration research : why it matters

Animal coloration : production, perception, function and applicaiton Philosophical transactions of the Royal Society of London / B ; 372

The genetic basis of discrete and quantitative colour variation in the polymorphic lizard, Ctenophorus decresii

Sexual selection, natural selection and the evolution of dimorphic coloration and ornamentation in agamid lizards