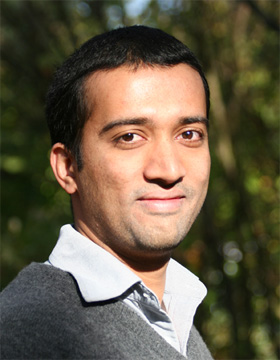 Born in 1982 in Chennai, India
Studied Wildlife Science at the Wildlife Institute of India

Eating with the Enemy

A dominant idea in ecology is that the more similar species are, the more likely are they to compete and avoid each other. This idea has formed the core of theory underlying our understanding of species coexistence. More recently, however, studies have documented examples of positive interaction between ecologically similar species. My own doctoral dissertation found that, globally, species co-occurring in mixed-species flocks of insectivorous birds were more similar than expected by chance. These examples cast doubt on the stereotyping of ecologically similar species as competitors and suggest that, under certain conditions, similar species can also interact positively. During my time at the Wissenschaftskolleg zu Berlin I will try to understand what these conditions might be. I will identify the various contexts in which organisms might benefit from grouping/associating with similar individuals and the conditions that prevent them from doing so with conspecifics. I expect that when organisms face the need to group or associate with ecologically similar organisms, but are unable to do so with conspecifics for some reason, they then choose to associate with individuals of similar species instead. I will build a conceptual model (verbally to begin with but also mathematically later on) based on this idea and identify suitable study systems in which to put the model to the test. Ultimately, I would like to examine whether theory underlying species coexistence needs to be reformulated to incorporate the possibility of positive interactions between similar species.
Apart from the primary work outlined above, I will spend part of my time at the Wissenschaftskolleg pursuing two other ideas. First, I will carry out a critical reassessment of the papers I have published so far. I would like to go back to my published work and see whether I still stand by all aspects of these papers - the conceptual underpinnings of the work, the study design, the analytical approach and the inferences drawn - in the light of current knowledge. By current knowledge I mean both where the field and where my own understanding currently stand. I will also spend part of my time at the Wissenschaftskolleg trying to write a story to convey the workings and mysteries of mixed-species bird flocks to a non-scientific audience.

Importance of intraspecifically gregarious species in a tropical bird community

Why do birds participate in mixed-species foraging flocks? : a large-scale synthesis

Eating with the enemy