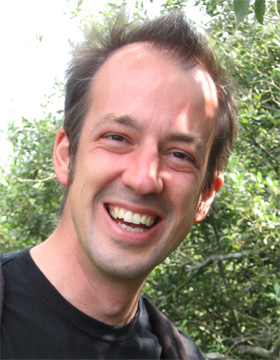 Born in 1979 in Manchester, UK
Studied Behavioural Science and Behavioural Ecology at the University of Nottingham

A Unified Theory of Individual Variation in Collective Behaviour

The natural world abounds with animals associating with others of their species in groups, which can be as transient as flocks of birds, as persistent as the perennial colonies of ants, or intermediate, such as people engaged in business enterprise. The behaviour of individuals cooperating in groups combines to form the collective behaviour of the group. Evidence is accumulating that, even when the group members appear similar, as with honeybees, individuals are highly variable. For example, honeybees vary in their readiness to perform different tasks. It is clear that such variation must be useful, otherwise natural selection should have eliminated it. Variation enables some individuals to be specialists at particular tasks, either because they develop the morphology (e.g. the jaws of soldier ants) or become highly skilled (e.g. the flower handling of foraging bees). However, too much specialisation would reduce group flexibility, so that if conditions change the group may perform certain tasks poorly. In this project, I will review the characteristics of animal groups to elucidate the ecological factors that influence the extent of specialisation. I will then construct mathematical models to make predictions about how individual variation will be affected by factors such as task number, environmental changeability, group size and relatedness amongst group members. These models will also predict how specialisation happens, such as in the morphology of bodies or in the development of behaviour. This body of theory will unite currently separate studies of persistent groups of related individuals (e.g. army ants), on the one hand, with transient groups of unrelated individuals (e.g. foraging fish), on the other. By synthesizing mechanistic and functional approaches to understanding individual variation in collective behaviour, this work will have implications for the design of artificial systems and for business enterprises.

Florivory as an opportunity benefit of aposematism

The evolution of decision rules in complex environments

The starvation-predation trade-off predicts trends in body size, muscularity, and adiposity between and within taxa