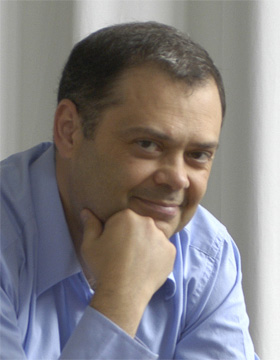 Born in 1962 in Potesti, Romania
Studied Philosophy at the Universities of Bucharest, Heidelberg, Oxford, and Glasgow

"Time is a moving image of eternity." This definition of time occurs in Plato's Timaeus, in a passage that is both strange and banal. A craftsman looks at a model and makes a copy of it - what can be more banal than that- But the artisan is a divine Demiurge, the product that he frames is time, and the model he copies is eternity. All this makes the banal scene of a craftsman at work look very strange indeed. The scene has also a chiaroscuro effect. If something is made and we know how it was made, we better understand that something. But turning time into an artefact does not actually illuminate its elusive nature, mainly because its model, i. e., eternity, remains a rather obscure, undetermined entity. Plato's claim that ideas are paradigms of their sensible copies, usually referred to as his "paradigmatism", occurs in various other dialogues that precede the Timaeus. In the Timaeus, however, he deploys an all-embracing paradigmatism, in which even time is a product framed after a model. I shall argue that in spite of Plato's commitment of this all-embracing paradigmatism, eternity in the Timaeus should not after all be construed as a transcendent paradigm of time.

Heidegger and Plato : toward dialogue Topics in historical philosophy