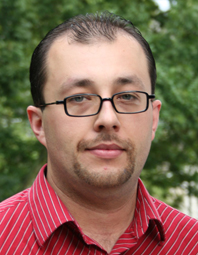 Born in 1976 in Ruda Slaska, Poland
Studied Classical Philology at the University of Silesia and Byzantine and Modern Greek at King's College London

My project aims to show that a classical "dimension" of Byzantine satires (quotations, similia, paraphrases) is not a superfluous manifestation of a given author's knowledge of ancient times, but a means of expressing an author's beliefs or ideas that cannot be expressed openly or are strengthened by using the ancient heritage. Therefore, I will explore the issue of a tension between classical "superstructure" and Byzantine context. I believe then that only by analysing the classical mask of these works we can fully understand their messages.
During my stay in Berlin I also intend to work on my book entitled "The Legend of Byzantium in the 19th and 20th Centuries", especially on the part devoted to the image of Byzantium in German literature and culture.

What's So Byzantine Funny? The Byzantine Sense of Humour

Humour is both a very common and very difficult phenomenon to describe. However, if great minds such as Sigmund Freud and Henri Bergson devoted their precious time to this issue, then it must be taken seriously. Only quite recently - at least from the perspective of a Byzantines studies on humour and laughter stated that only now has this subject come to serious scholarly attention. Lately scholars working on mediaeval literature, both western and eastern, have started researching the issue of humour, laughter, and so on.

Studying humour is a fascinating job, since it unites many disciplines. Articles about laughter are published in journals dealing with sociology, anthropology, linguistics, psychology, history, literature, biology - and I could keep listing fields till the end of this abstract. What it clearly shows is that this issue transcends the boundaries of any one single discipline. But does it transcend time as well?

Can we safely say that people's sense of humour did not change down through the centuries? If it did not, our job would be very easy; but things are not that simple. Most likely the truth lies somewhere in between. There are subjects that are laughed at in many cultures and across the centuries. To give an example - physicians were mocked in ancient Greece, Rome and Byzantium. But, on the other hand baldness seemed to be funnier for the Byzantines than for the ancients. And I myself still do not understand what is so amusing about public executions.

Byzantine humour can be extrapolated from various sources, mainly chronicles and satires. Some scholars claim that Byzantine humour was very basic and primitive; however, we can find a wide array of jokes operating at different levels. In some cases we cannot understand why a joke was funny, because its context is unclear: "Your house is on fire." "Don't worry, I've got the key." Do we find this funny - or not - for the same reason it was for the Byzantines?

It would be erroneous to believe that we can fully reconstruct and understand the humour of a society that ceased to exist centuries ago. We can only peer through the keyhole and hope for a fleeting glimpse. To understand fully what was funny for the Byzantines we must employ a completely different methodology. Something like this - "We should kindly wish to inform you that the lecture on time travel will be held last Monday."

Dealing with the heritage