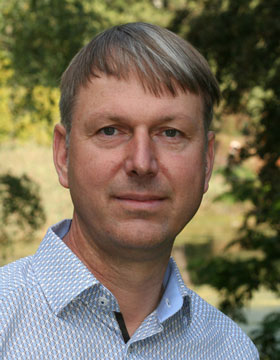 Born in 1965 in Aalen, Germany
Studied Physics at the Georg-August-Universität Göttingen and at the University of Stuttgart

The Digital Revolution: a Fight for the Future of Our Society

In connection with the digital transformation, many imagine computers, the Internet, smart phones, and a more comfortable life. In reality, however, a perfect storm is brewing that could even surpass the impact and scale of the industrial revolution. In recent years, many new digital technologies have spread. Any of these technologies - such as Uber, AirBnB, digital currencies like BitCoin, or self-driving vehicles - could turn entire business models and business sectors upside down. Even established institutions are currently being challenged: besides traditional money, data has become a new currency. Suddenly, we live in an "attention economy", which is fueled with personal data collected by "surveillance capitalism". The fact that "code is law" currently allows one to surpass the legislation of parliaments, and with the methods developed for neuro-marketing one tries to exert behavioral and social control. Taken together, this changes the monetary and economic system, legislation and politics substantially. What are the opportunities and risks for businesses, democracy and human rights? What are the choices that are to be made to ensure that technology helps people manage the challenges of the future successfully and that we will create a trustworthy digital society that respects and protects human dignity? My planned book project will try to reconstruct the technological shifts, politics and discourse related to digitalization as well as the disruptive developments that have resulted from it. It also dares a look into our possible future(s).

Helbing, Dirk. Towards Digital Enlightenment: Essays on the Dark and Light Sides of the Digital Revolution. Cham: Springer, 2018.
-. Social Self-Organization: Agent-Based Simulations and Experiments to Study Emergent Social Behavior. Berlin, Heidelberg: Springer, 2012.
-. The Automation of Society Is Next: How to Survive the Digital Revolution. North Charleston, SC: CreateSpace, 2015.

For a long time, experts have warned of the implications of a non-sustainable world, but few have understood the implications. We are more in trouble than most people think. This is actually a matter of life and death - to an extent we have not considered possible before the Corona crisis. Contrary to our expectation, the social and economic system will change dramatically, and it will change soon - either by catastrophic events or by attempts to avoid future crises and disasters.

This brings us to the question: how will our future society look like? There are different options, and someone has to choose. So far, however, we have not been asked. Most likely, the future will be characterized as some kind of "digital society". The current spectrum of options ranges from surveillance capitalism to technological totalitarianism. Both have considerable downsides.

Of course, I will not attempt to predict the future. However, I will describe developments I have been following rather closely. Big Data, Internet of Things, Artificial Intelligence, Quantum Computing, Brain Computer Interfaces, Blockchain Technology. These developments are amazing and sometimes scary, but first of all, they need more awareness and debate.

I will also try to put these developments into perspective, considering sustainability and other issues. Finally, I will illustrate what they could mean for us and point to alternative scenarios as well.

Finance 4.0 - towards a socio-ecological finance system : a participatory framework to promote sustainability

Next civilization : digital democracy and socio-ccological finance - how to avoid dystopia and upgrade society by digital means The automation of society is next

Towards digital enlightenment : essays on the dark and light sides of the digital revolution Statistics / Social Sciences

We need to build an upgraded, digital democracy

A Paradise, but Freezing Cold

Dirk Helbing in an interview with Manuela Lenzen

Keynote on Rethinking our Economy