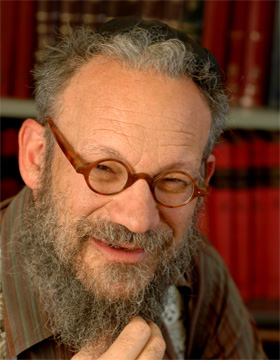 Born in 1946 in New Jersey, USA
Studied Semitic Languages at Columbia University and Talmud at the Jewish Theological Seminary of America, New York

A Traveling Homeland: the Babylonian Talmud as the Foundation of a Diaspora

During my year's tenure at the Wissenschaftskolleg, I plan, Deo Volente, to produce a manuscript with the above title. It will be an interrogation into the structure of diaspora itself as a cultural phenomenon and a case study based on the theoretical position thus developed. The underlying hypothesis is that, indeed, diaspora is best described as a synchronic cultural phenomenon and not as a diachronic historical development. The condition of diaspora is generated by people/a "people" having a doubled cultural location, one local and one translocal. The location of culture here is precisely generated, not infrequently it involves the production/consumption of culture in more than one language, one closely related (if not identical) to the local language where a given community lives and one in a language shared by other communities belonging to the diasporic structure but not necessarily the locale of the given community. An excellent example of such a diaspora is the Jewish Community of late antiquity and through the Middle Ages in which cultural production was oriented toward local cultures/languages, viz Arabic, Spanish, Germanic, French, and Italian (among others), while there was also highly significant cultural production in Hebrew, which was thus shared among other Jews who did not speak or write the same local vernaculars.
The thesis of this monograph is that the Babylonian Talmud, studied in two ways, manifests this structure and even is originary for it.
After a first chapter laying out and exemplifying the theoretical claims above, I plan two more sections (whether each will be a chapter or more than a chapter remains to be seen). The first of these sections will deal with the Talmud as a text, seeking to explore its cultural location in such a diasporic condition, one plane of the language (or one language within the text to use Bakhtinian talk) is produced in deep interaction with the local culture of Sasanian Iran, while the other plane within the text involves a Hebrew/Aramaic cultural location of production and impact and consumption that is oriented toward the other great rabbinic center of late antiquity, Greco-Roman Palestine. An attempt will be made in this chapter to describe this condition more exactly than has been done until now, perhaps furthering an ongoing vital discourse within Talmudic studies at the present moment. The latter of the two sections belongs to the project "Zukunftsphilologie: Revisiting the Canons of Textual Scholarship" organized by the Forum Transregionale Studien. It is a study of the reception and interpretation of the Talmud in early modern Spain and the Sefardic diaspora of the 16th century, the argument being that the doubled location of Talmudic studies in 14th-century Spain between the cultures of transnational rabbinism and Latin/Arabic culture in Iberia is a productive way of thinking about what is going on there as well.
In a conclusion, I hope to argue that the text seen this way constitutes this Jewish diaspora as much as it is constituted by it - or even more.

"It has not yet been sufficiently proven that the preservation of the national character of the Jews outside of their land is connected with the Land of the Jews. On the contrary, in the ancient sources there appear clear echoes of a strong feeling of spiritual [in the sense of geistige, DB] and religious non-dependence and independence which was dominant among the Babylonian Jews. That was the situation in the time of the Talmud, it goes without saying, in the time of the Geonim".
Hayyim Zalman Dimitrovsky

A famous story preserved in a medieval chronicle, The Book of Tradition, by Abraham Ibn Daud [1110-c. 1180], narrates the origins of a Jewish Diaspora in the Western Muslim world via the pirate capture of a ship bearing four great Talmud scholars. Since its most recent editor and scholarly commentator, the late Gerson D. Cohen has demonstrated almost beyond a shadow of a doubt that the story is entirely fictive, we can learn from it a great deal of truth. Asking about the expansion of the number of castaways from three as in Ibn Dauds apparent sources to four, Cohen remarks, "Ibn Daud could very logically extend the homily by pointing to the four scholars who initiated the salvation and spread of Torah among the Jews of the Muslim world after the eclipse of Jewish learning in Babylonia. In other words, four is the number symbolic of divine providence over Israel, and the four captives are truly the new dispersion, despatched by God to the four corners of the earth, as it were, to bring the word of the Torah into the new and last stage of the fourth kingdom." Without necessarily accepting Cohens apocalyptic interpretation (nor necessarily denying it), I firmly assent to his assertion that the making of the story be about four scholars dispersed to four places (with one scholar and his place described by the author as completely unknown to himself) makes this a story of a new dispersion, a new diaspora and thus germane for my inquiry here into the meaning of Jewish diaspora(s) and their relevance for the study of Diaspora tout court.
Generally the term diaspora is used either in a kind of timeless geographical sense, so, for instance, all of the thriving communities of Jews throughout the Ottoman Empire and beyond would be called the Diaspora in contrast to a small (if vital) community of refugee Jews from Spain who have landed in Palestine in the sixteenth-century, simply owing to geographical location; or in a chronological sense, the Diaspora being understood as a one-time event of scattering from the "Homeland;" or in the lachrymose sense, the condition of being an oppressed minority longing to go "home." I am proposing a very different approach to the question of diaspora, indeed to the question of what is diaspora. The propositions that I am going to defend here for the discourse of diaspora are the following: 1) Diaspora is primarily a synchronic condition by which human groups are related to each other in space; they may (and frequently do) have a diachronic origin but need not. 2) Once this is said, a "homeland" (real or even imagined) is not a necessary or sufficient condition for the existence of a diaspora. 3) Within the history of a people, there can be multiple diasporas, shifting homelands and even, it is the task of this lecture to claim, diaspora in which homeland was entirely absent and replaced completely by cultural connection, in this case a book.
Diaspora is a situation in which a given human collective has a doubled cultural and social location, once to the place in which it is found and once to at least one other collective that is somewhere else. My prime example will be certain parts of the history of the Jews. "Diaspora," in its original sense, while founded on a Greek word meaning "scattering of seeds," and thus implying some sort of a point of origin, unlike "exile," focuses on the germinating of the seeds in new soils, the creation of new homes and not on not being at home. In fact, although this is surely to commit the etymological fallacy, it is heuristically instructive perhaps to note that the earliest usages of the term in Greek, whether classical or Jewish koine, imply nothing whatever of a forced exile but only of productive colonization! Indeed, the Septuagint uses the term "colony" for the Hebrew word, usually translated "Exile." We cannot think of the Jewish diaspora, therefore, as always and everywhere being understood as a forced and oppressive exile. Indeed, as we shall see, over and over the Jews manage to imagine for themselves new homelands, homes from home. What holds the diaspora together, indeed on my definition what makes it a diaspora is the cultural practice of Talmud learning.

The Jewish Gospels : the story of the Jewish Christ

A Traveling Homeland : The Babylonian Talmud as Diaspora
University of Pennsylvania Press more publications in the Fellows' Library

Talmud's Way: Remembrance of Things Past