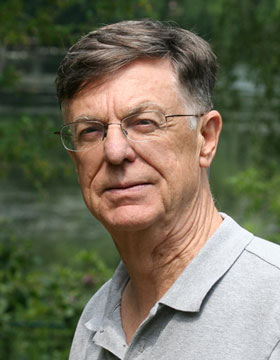 Born in 1949 in Evanston, Ill., USA
Studied Biology and Mathematics at Boston College, and Theoretical Biology at the University of Chicago

Nature, Nurture, and the Nurturers

In my research as a Fellow at the Wissenschaftskolleg, I want to extend my theoretical investigations of evolution in metapopulations (recently summarized in Wade 2016, Adaptation in Metapopulations, University of Chicago Press) to include interactions between genomes (e.g., nuclear and organelle) and between species in meta-communities. Most organisms live in metapopulations, interacting locally with their own and other species in ways that affect individual fitness and in genetic contexts that vary from one deme to another. As a result, natural selection in metapopulations always differs from that in large, randomly mating populations, whether or not there is an added component of higher-level selection acting among demes. This difference between adaptive evolution in metapopulations and that in non-subdivided populations has been overlooked by evolutionary genetic theory with its tradition of partitioning variation into dichotomous genetic and environmental factors, nature and nurture, respectively. This traditional approach founders whenever some of the factors responsible for variation in phenotype or fitness are both genetic and environmental at the same time. It is these genetic factors, called "indirect genetic effects" or IGEs, that create causal pathways between the genes in one individual and the phenotypes expressed by others, even if unrelated. These pathways permit the co-evolution of phenotype and context that is unique to metapopulations. Because an IGE is an environmental source of variation that can itself evolve in response to selection, IGEs are fundamental to the co-evolution of phenotype and context. Their existence fundamentally changes the paradigm of "Nature versus Nurture" to a new paradigm, which I refer to as "Nature, Nurture, and the Nurturers". I propose to write a scholarly monograph with this working title as my project when a Fellow at the Wissenschaftskolleg.

Nature, Nurture and the Nurturers - The Evolutionary Genetics of Interaction

Organisms of all kinds tend to live in clusters or local populations. A metapopulation is a group of local populations, which may exchange migrants, suffer local extinctions, or be established by colonization. Frogs, toads and salamanders in vernal ponds, baboon troops spread across the African veldt, communities of microbes on individual hosts, or millipedes living under logs are examples of naturally occurring metapopulations. An evolutionary biologist might ask what difference does it make to the evolutionary process if organisms live in metapopulations instead of being homogeneously distributed like grass on a lawn? Without interactions, it makes little difference at all. With interactions, it can make a great deal of difference, causing the direction, rate and outcome of genetic evolution to vary from one local population to another.

Understanding interactions is important to understanding the human condition. Interactions between genes underlie many complex human diseases, including schizophrenia, autism, asthma, obesity, and diabetes and help to explain why these diseases are more common in our population than single-gene diseases like cystic fibrosis, and why these genes are so hard to discover and map. Interactions between genes and the abiotic environment make important contributions to the origin of new species by natural selection and may allow some species to adapt rapidly to climate change but doom others to extinction. Lastly, interactions between individuals and their social environments are very different from interactions with the abiotic environment. Adaptation to a social environment can be much more rapid than adaptation to an abiotic environment, because the social environment contains genes and can thus coevolve. With social interactions, metapopulation genetic structure, which creates variation in social context, can be more important to the evolutionary process than the genetic architecture, i.e., where in the genomic map a gene resides. In the domestication, selection in social environments is occurring in response to demand for the ethical treatment of animals, for free-range eggs and meat, and for more natural products. These avenues of application require innovations in theory, in breeding methods and in experimental designs.

Criteria for holobionts from community genetics

The evolution of sperm competition genes : the effect of mating system on levels of genetic variation within and between species

Multilevel and kin selection in a connected world

The evolutionary origin and elaboration of sociality in the aculeate Hymenoptera : maternal effects, sib-social effects, and heterochrony

Nature, Nurture and the Nurturers - The Evolutionary Genetics of Interaction