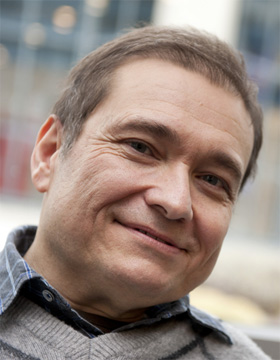 Born in 1958 in Izmir, Turkey
Studied Psychology at the Ruhr-Universität Bochum

The Parallel Evolution of Cognition

In short, my question is the following: Is it possible that the capacity for complex cognition arose several times during evolution such that groups of non-mammalian animals might have developed as-yet unknown brain mechanisms that generate intelligent behavior?
Until very recently, scientists thought that the emergence of the mammalian neocortex was a conditio sine qua non for complex cognition. We meanwhile know that, to some extent, this view is wrong. Studies of the last two decades revealed that corvids, in particular, are cognitively on a par with apes. In addition, birds have brains whose size in proportion to their bodies resembles that of mammals; thus, the detailed architecture of the neocortex does not seem to generate a computational advantage that surpasses the capacity of the non-cortical avian forebrain. Taken together, birds and mammals convergently developed two differently organized forebrains that generate similar cognitive abilities.
My plan is to seek answers to the following question: Can we understand the evolution of complex cognitive abilities by comparing the evolutionary brain changes between a) mammals and birds in general and b) between primate and non-primate mammals, on the one hand, and corvid and non-corvid birds, on the other?
Research: First, I will carry out a comparative literature study on the evolution of the absolute and relative size of the bird and mammalian forebrain. Integrating data from allometric studies that span four decades of research, I plan to test whether the enlargement of associative forebrain structures could be a common evolutionary strategy for the emergence of intelligence. Second, I will review the literature for cognitive tests that are suitable to tap cognitive core functions in different species. I plan to concentrate on four areas: a) stimulus-response vs. stimulus-outcome learning; b) withholding of actions vs. fast exploitation; c) flexible response switches vs. stability of responses; d) focusing attention vs. monitoring the environment.
By doing all this, I hope that my stay at the Wissenschaftskolleg zu Berlin will contribute to developing a new theory of the evolution of brains and complex cognitive abilities.

The Parallel Evolution of Cognitive Abilities

In short, my question is the following: Is it possible that the ability for complex cognition arose several times during evolution in parallel? This could imply that some non-mammalian animals developed brain mechanisms that differ from ours but that also generate intelligent behavior.

Until very recently, scientists thought that the emergence of the mammalian neocortex was a conditio sine qua non for complex cognition. Birds and all other non-mammalian beasts own nothing that resembles the neocortex. Thus, according to this view, we mammals should possess complex cognitive abilities that surpass other kinds of animals. Unfortunately, this view is wrong. Studies of the last two decades revealed that especially corvids and parrots are cognitively on par with apes. In fact, there is not a single cognitive ability demonstrated in chimps (brain weight 400g) that was meanwhile not also demonstrated in corvids (brain weight 12g). So, the neocortex does not seem to generate a computational advantage that surpasses the capacity of the non-cortical avian forebrain. Since the evolution of birds and mammals parted ca. 300 million years ago, it is likely that birds have taken a completely different neural route to generate complex cognition. The really fascinating point is the following: The way that birds solve cognitive problems is virtually identical to the way we mammals do it. Thus, birds and mammals convergently developed two differently organized forebrains that generate virtually identical cognitive abilities. Radically different neuroanatomies seem to generate similar functions.

Im sleepless when I think about the implications of these findings. In the middle of the night, questions like the following come up in my mind: "Does the avian brain have an advanced organization that permits the generation of higher cognitive abilities within a small brain?"; "Why did birds never evolved big brains?";"Why should cognitive abilities be related to brain size, anyway?"; "Is it possible that the vastly different brains of birds and mammals are identical in terms of features like some internal connectivity?"; "Does nature lack creativity or is there possibly only one way to organize thinking? In the latter case, every organism would indeed converge during evolution to a common functional organization?".

My research taught me that most of what I took as granted in my previous life as a Cognitive Neuroscientist was to some extent wrong. I hope that my stay at the Wissenschaftskolleg zu Berlin contributes to develop a new theory on the evolution of brains and complex cognitive abilities.

The neural basis of long-distance navigation in birds

The convergent evolution of neural substrates for cognition

Mirror-induced behavior in the magpie (Pica pica) : evidence of self-recognition