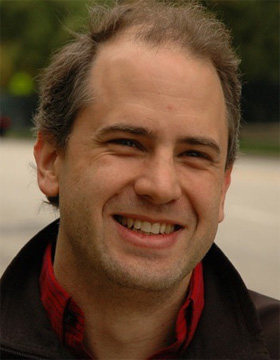 Born in 1969 in USA
Studied Computer Science and Psychology at Oberlin College and MIT, and Zoology at the University of Oxford

The Evolutionary Foundation of Cancer

My plan is to write a graduate-level textbook on Evolution and Cancer. The field of evolution and cancer currently lacks a textbook that summarizes the field and identifies the open questions and promising avenues for research. I have a contract with Oxford University Press to write the book and have developed an extended outline, but have not been able to make much progress on the book during my day-to-day routine at UCSF. The essence of the book is a survey of evolutionary and ecological theory as it applies to cancer. Thus, writing the book will benefit greatly from regular discussions with other evolutionary biologists and ecologists in residence at the Wissenschaftskolleg and specifically from discussions with the Cancer Evolution focus group.
In the process of writing the textbook, I propose to develop a vision of which experiments and projects in the evolution of cancer are both feasible and likely to have a large impact on the management of prevention of cancer. This will form the basis of a large collaborative grant proposal to help fund our Center for Evolution and Cancer at UCSF. In particular, I am interested in methods to slow somatic evolution for cancer prevention and to delay, prevent, or target the evolution of therapeutic resistance in malignant neoplasms.

I will tell four stories of cancer: the origin of cancer a billion years ago, the origin of the evolutionary theory of cancer in the 1960s, the origin and natural history of a typical tumor, and the story of how I came to study these stories.

Cancer is a problem of multicellularity. The problem of evolving a body made up of more than one cell, was a problem of constraining the proliferation and function of the cells of the body, and subverting their functions for the survival and reproduction of the entire body. For multicellular life to evolve, cancer had to be suppressed. Mechanisms for suppressing cancer have continued to evolve over the last billion years as organisms evolved with larger bodies and longer lifespans. I will mention some of our recent results studying elephants and whales in order to discover how they are suppressing cancer better than humans.

Cancer develops in a multicellular body through an evolutionary process among cells. Cells in tumors mutate and compete for resources in a microcosm of natural selection. Any mutant cell that can reproduce faster or survive better than its neighbors will tend to spread through the tumor. In this case, survival of the "fittest" cells leads to malignant tumors that can eventually kill their host. When we apply a cancer drug or radiation to a tumor, there are often some mutant resistant cells among the billions to trillions of cells that make up the tumor. These resistant cells survive therapy and can then generate a new tumor. Because the recurrent tumor derives from resistant cells, the new tumor is typically unresponsive to the original therapy and we must move to new drugs or treatments to have a hope of a cure. Thus, evolution is the theory of both how we get cancer and why it has been so hard to cure.

While evolution is the accepted theory of cancer, evolutionary theory is rarely used in cancer biology or treatment. In fact, we found evidence that even in the most obvious case of evolution in cancer, the selection for therapeutic resistance, the majority of recent papers did not use evolutionary theory to frame the phenomenon. In fact, a shockingly large proportion of papers had absolutely no theoretical framework for explaining their results. I will discuss some initial results to help explain why people are not using evolution to understand cancer, and how the metaphors they do use bias their perceptions and likely influence their treatment decisions.

Finally, I will describe some of the opportunities we are pursuing in this largely unplowed field of applying evolution and ecological theory to understand, prevent and treat cancer.

Cooperation and cheating as innovation : insights from cellular societies

Peto's paradox and the promise of comparative oncology

Is eating behavior manipulated by the gastrointestinal microbiota? : evolutionary pressures and potential mechanisms

Cancer in light of experimental evolution