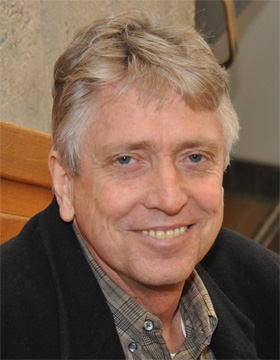 One of the focus questions for our group is the role of gene duplication and other elements of genetic architecture (e.g., linkage of these genes to sex chromosomes versus autosomes, or the size of the effect of each gene on the resulting phenotype) on the expression and perception of exaggerated traits. As in so many fields of modern biology, these questions are being revolutionized by the deluge of genomic data being produced for both model and non-model organisms. I will apply this revolutionary ability to study the genomics of exaggerated traits to two complementary systems:
First, in guppies and closely related species, genes for male coloration are highly duplicated on sex chromosomes, and genes for perceiving this coloration (opsins) have duplicated and differentiated in the most colorful lineages. I hypothesize that "runaway selection" for the duplication of coloration genes and duplication of sensory genes has driven diversification in these species in a self-reinforcing feedback loop. Using the comparative method I will look for a correlation between gene copy number underlying these two types of traits. This idea of reciprocal gene duplication in co-evolving signal/receiver systems may drive a rapid expansion of gene families in other systems, such as olfactory receptors and the desaturases that modify chemosensory chemicals, and sperm-binding proteins and the receptors that bind these on egg membranes.
Second, jawed vertebrates respond to the diversity of pathogens they encounter by producing an almost limitless antibody repertoire, based on three expanded gene families. I will explore the effect of gene duplication on the expansion of the highly exaggerated antibody repertoire and the contradictory effects that pathogen recognition versus recognition of self and autoimmunity has had on the evolution of these gene families.
The study of these two systems will be complementary in that in both cases the organism must sense and adapt to rapidly changing environmental constraints, and then these adaptive genomic changes select for further diversification in the environmental pressures.

Hubris in the Post-Genomic Era

With new sequencing technologies being developed every few years, much has been accomplished in the field of genomics. However, some very strong promises have accompanied the development of these new techniques (such as the "1000 dollar personal genome" and the idea that a person's genome sequence will determine much of their disease propensity), and in some cases these overly ambitious promises may have actually impeded progress. In my talk I will concentrate on the more technical aspects of how difficult it can be to accurately determine an organisms genome. I will first review some genetics and explain high-throughput genomic approaches. I will then discuss two genetic studies from my lab for which high-throughput genomic approaches have had difficulty resolving the underlying genetic structure of the characters of interest.

The first example is from human immunology. Organisms are exposed to a seemingly limitless array of pathogens (e.g. viruses, bacteria), and it is impossible to predict what new threats will emerge. In order to produce a vast array of molecules that will recognize and remove these pathogens, vertebrates have evolved the adaptive immune system. But the complicated structure of these genes coding for the adaptive immune system makes it difficult for high-throughput genomic techniques to measure differences among individuals, and thus we have not been able to test for associations between these genes and disease propensity, one of the main goals of human genomics. The second example involves the evolution of the visual system in fishes. Just as in the immunoglobulin example, this system involves highly similar and duplicated genes, which are difficult to resolve with standard genomic approaches.

Finally, I will present some suggestions that may help combat this tendency to ignore the complications of genetics, even in the post-genomic era.

Hybridization leads to sensory repertoire expansion in a gynogenetic fish, the Amazon molly (poecilia formosa): a test of the hybrid-sensory expansion hypothesis

Opsin gene duplication and diversification in the guppy, a model for sexual selection

Kinship, Conflict and Cooperation: Reconceptualizing kinship for the 21st century