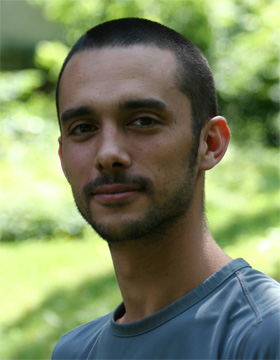 Born in 1983 in France
Studied Evolutionary Biology and Ecology, University of Montpellier II

Understanding how individuals pair to form reproductive units is the key question motivating my project. While the potential influence of pair formation in evolution is firmly established, how pair formation occurs in natura in humans, but also in other organisms, still remains an entirely open question.
During my visit to Wiko I will develop theoretical models to study the relationship between mating preferences and the characteristics of actual pairings. This will improve our understanding of how individual variation between and within sets of mating preferences influences competition for mates and also how relatively stable pairs can be formed despite the disagreements in preferences expressed by both sexes. My goal is to use these models to predict the evolution of pair formation processes in a context of mutual mate choice. In addition, I develop a statistical approach enabling us to infer mating preferences from mating pairs in natural population. As an application, I will study preferences for the so-called male-taller norm, according to which females prefer to pair with males taller than themselves, in natural populations.

When a female black grouse (a bird) decides to mate with one particular male in a mating arena rather than with the others who have also gathered there to perform their courtship rituals, and when a female seed beetle fails to kick away strong males whose penis shapes are reminiscent of medieval spiked maces, the evolutionary biologist sees one and the same thing: mate choice. It sounds shocking (and sexist), but that is pretty much how Darwinian selection grasps it, and this echoes the only quote I may remember forever: "Cette leçon est lune des plus terribles qui soit pour lHomme. Nous ne pouvons accepter que la Nature ne soit ni bonne ni mauvaise, quelle ne soit ni cruelle, ni bienveillante, mais simplement inaccessible à la pitié: indifférente à toute souffrance et sans but." (The quote is from Richard Dawkins and was published in the French magazine Pour la Science, 1997). i

Evolutionary consequences of mate choice are in fact so important that we would probably not recognize our world if mate choice did not happen. My guess is that it would be less colourful, less noisy, less smelly, less competitive... less extravagant in many ways. Unfortunately we cannot know for sure how it would be, because mate choice has happened in almost all kinds of organisms for millions (or billions?) of years. Ranging from yeasts to plants and even humans, mate choice has indeed shaped and continues to shape the evolution of very disparate species: some with brains, some without, one (or more?) with consciousness, most without.

During my colloquium, I will start by focussing on how we think that mate choice has evolved. To do so, I will review the main scenarios that have been proposed in theoretical biology. I will show that, albeit interesting, these abstract models have neglected many concrete features that could profoundly modify the evolution of mate choice. In particular, I will present the first results of a theoretical work I am currently doing that aims at relaxing one crucial assumption shared by many theoretical works: the assumption of infinite polygyny (i.e. when you can always get what you want). Then, I will briefly discuss the evolutionary consequences of mate choice, and after arguing that mate choice has shaped most differences between sexes in animals - from genes and physiology to shape and behaviour -, I will discuss the extent to which mate choice may have influenced our species. To be more precise, I will mainly discuss about how we should tackle such questions and what the main caveats for such research are.


i "This is one of mankind's most terrible lessons.  We cannot accept that Nature is neither good nor bad, that it is neither cruel nor benevolent, but simply incapable of pity: indifferent to all suffering and without purpose."

The transition to modernity and chronic disease : mismatch and natural selection

Climatic variation and age-specific survival in Asian elephants from Myanmar

Why is lifetime fertility higher in twinning women?

Natural and sexual selection in a monogamous historical human population

Short stature in African pygmies is not explained by sexual selection

From prefered to actual mate characteristics : the case of human body shape

The Transition to Modernity and Chronic Disease: Mismatch and Natural Selection
Nature more publications in the Fellows' Library