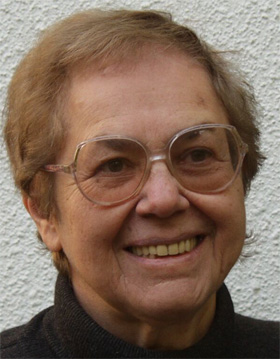 Born on February 17, 1932 in Buffalo, New York; passed away on November 20, 2016 in Chicago, Illinois (USA).
Studied Psychology at Harvard University

In addition to working with the group on joint activities, there are two writing projects that I will work on in Berlin. I have been invited to contribute a chapter on the development of spatial cognition to the next revision of the main reference text in developmental psychology, Handbook of Child Psychology, which is very widely used in the field. The chapter will include various topics not covered in my book and will involve a new organization of the material. I have recently obtained important new findings that have broad implications for spatial development.
In addition, my colleague Larry Hedges and I are starting to write a monograph on our hierarchical model of information coding. An important application of the model concerns the role of hierarchical organization in spatial representation. The monograph presents the general idea that information is coded hierarchically, at more than one level of detail. The research on spatial representation is best considered in the context of hierarchical information storage and use across domains. By presenting our overall rational model, we hope to enhance each particular application and thus to make the strongest case for this form of coding in the domain of spatial representation.

Language is of central importance in the intellectual and social life of human beings. It underlies our ability to learn, to think, and to communicate. My talk today concerns children's acquisition of their first language. There are two aspects of language development -- acquiring words and mastering syntax. It is commonly believed that both aspects of language acquisition are controlled by biological factors. The sizes of the vocabularies of different people vary widely, and such differences have been taken to reveal underlying ability differences. Syntax is quite similar in different people, and this similarity has been taken to indicate that grammar is a species-wide innate capacity. The belief that language skills are biologically determined and fixed did not emerge from systematic empirical work, but rather in reaction to particular historic events. For vocabulary, capacity claims arose from the usefulness of vocabulary tests in predicting whether a child was normal and could succeed in school or was defective. For syntax, innateness claims arose in the context of linguistic and psychological theories intended to undermine behaviorist explanations about language learning that were clearly inadequate. These claims served their intended functions for a period of time.
Recently, however, evidence has begun to emerge showing that language skills are sensitive to environmental variation. Investigators presently hold different views about the role of environmental versus innate factors in language development. To resolve issues concerning the role of input requires systematic empirical evidence. My research aims to clarify the role of the language environment in the development of vocabulary and syntax. Such work is important for addressing theoretical issues concerning the processes involved in the acquisition of language, as well as practical issues about the conditions necessary to have people develop the skills necessary for full participation in technologically advanced societies.
Our first study was concerned with vocabulary. We examined amount of caregiver (mother) speech in relation to early growth of vocabulary in 22 children from 16 to 26 months. We found that the amount parents talked to their children at 16 months was highly associated with growth rate and with vocabulary size at 26 months. The words used to children in all families were similar, related to the daily activities of those families, e.g. bottle, diaper. However, there were large differences in how much mothers talked; the amount of speech by different mothers varied by a factor of 10. Amount of parent speech was highly related to children's vocabulary size. These findings, I will show, are, at least in part, an effect of variations in language input, not of genetic differences among the families. The findings highlight the fact that acquiring a large vocabulary is an enormous associative learning task.
Our next studies were concerned with syntax. Several lines of argument had been used to support the doctrine that syntax is based on universally available innate principles. These include the fact that only humans possess syntax, that basic grammatical forms are acquired early in childhood, and that development is similar across children. We obtained data on complex syntax in children between 4 and 5 years of age, both in production and comprehension. We also obtained data on syntactic complexity in the speech of their caregivers. The speech children produced and understood varied widely, and the complexity of the speech of their caregivers also varied widely. The complexity of caregiver speech was highly related to the level of syntactic skills in children. Through a series of studies of teacher speech, we established that genetic factors are not sufficient to explain these input effects. Clearly, the complexity of caregiver speech is causally related to mastery of complex language in children.
I will discuss the implications of these findings, taken together with data and arguments from other investigators, for our understanding of the interaction between biological and environmental factors that is involved in the construction of a mature language system.