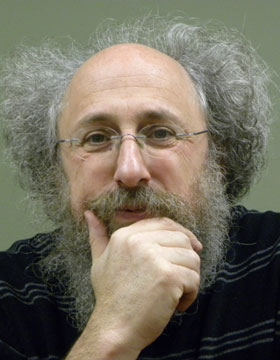 Born in 1960 in Jerusalem, Israel
Studied European History at Tel Aviv University and at Princeton University

The Prince, the Jeweller and the Mogul: the Historical Meaning of the Most Extraordinary Early-Modern Work of Decorative Art

I am writing a book-length interpretation of one of the most fantastical works of decorative art in early modern Europe, The Throne of the Great Mogul, created at the beginning of the 18th century by the top Baroque jeweller, Johann Melchior Dinglinger, for his Saxon prince. Set on a tabletop-size, stage-like scenery are 160 moveable miniature pieces  human figures, animals and inanimate objects: exquisite pieces of jewellery-work made with some 5,000 gemstones and endless enamel work. Each piece individualized with amazing care, together they represent the court of the Indian Mughal emperor Aurangzeb during his birthday celebrations. The overall effect is overwhelming.
And so is the puzzlement of the historian. In both form and content, the Throne of the Great Mogul seems to come straight out of a magical and beautiful fairy tale. And yet the narrative requirements of fairy tales are not the same as those of history. As historical actions by actual agents in a real historical situation, this story appears to make no sense. Why did the jeweller spend eight years of his free time to create this model? Why did the prince, broke after a humiliating military defeat, pay a small fortune to buy it? Why this particular theme of the Thron des Großmoguls  a representation of a living foreign potentate on the other side of the globe? And why represent this theme in such an impossibly intricate, unprecedented form, with many unique and often mysterious features? In short, how can we make sense of this work of art, of this transaction, of this tremendous artistic investment and effort? What does this object mean?
My effort to answer these questions proceeds in a kind of floral pattern, in the manner that a child draws a flower. At the centre stands the Thron des Großmoguls. Each book chapter begins at the centre and traces, in petal after petal, a movement away from the model and then back again. Each detour carefully unpacks one element of this complex object, keeping in mind the peculiarities of form and content, and takes the analysis into a different aspect of European and global history and art at the beginning of the 18th century.

My project aims to interpret, explain and historically situate what may well deserve the prize as the single most fantastical object created in early modern Europe (around 1700 to be more precise): Johann Melchior Dinglingers "Throne of the Great Mogul" in the Grünes Gewölbe in Dresden. Aside of one short text by Dinglinger that is less transparent than it first seems, and a few related documents, what we have to work with is the object itself, an astounding concoction of miniature jewelry and enamel pieces that together create a busy theatrical-like scene supposedly set in the Mughal court of the same period.

Methodologically, the presentation will explore what a historian can do in such circumstances with such an object. I will try to show that this object requires more than one perspective to explain its different facets. The three figures in my title turn out conveniently to represent three different such perspectives, which in turn lead to three broad arguments related to open historical questions of this period: the fantasies and realities of central European absolutism; the changing nature and meaning of art in the West; and the interdependent creation of the embodiments of rulership across Asia, Africa and Europe in the first age of globalism. Each of those will require a broader look at cross-European and even global cross-continental patterns in this period in order to place what we see in "The Throne of the Great Mogul" in an appropriate and meaningful context. In each case I will connect some specific elements or characteristics of this complex object with a broader argument, while also opening for discussion the methodological justification for such moves.

With a possible yearning for Borges, this is a talk excerpted from a book for which the first word has yet to be written. I look forward to your thoughts!

Change and the corporeal in seventeenth‐ and eighteenth‐century gender history : or, can cultural history be rigorous?

The making of the modern self : identity and culture in eighteenth-century England

On queen bees and being queen : a late-eighteenth-century cultural revolution?

Gender in translation : how the English wrote their juvenal, 1644-1815