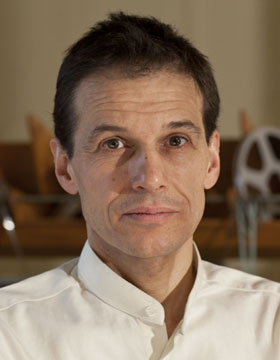 Composition of and Theoretical Work on the Second Book of "Miniature Estrose", for "Piano D'Amore"

Between 1991 and 2000, inspired by and written for Pierre-Laurent Aimard, a former Fellow of the Wissenschaftskolleg, I composed the "First Book of Miniature Estrose", a one-hour long cycle of seven pieces for "piano d'amore", a term of my own invention that indicated an instrument some of whose strings sympathetically resonate while playing thanks to the use of a special pedal.
Multiple revisions occupied me until 2010. Since then, this work became a milestone in the contemporary piano literature because of its use of the instrument, the force of the structure, and its implications for cognitive psychology and neurological research on the recognition of musical forms by our brain.
From the beginning, a second book was planned and roughly sketched (seven pieces), but I could never find a concentrated period long enough to work on it. I will compose this cycle during my stay at the Wissenschaftskolleg.
I will also use this time to formalize my composition research using OpenMusic, a Lisp-based graphical programming environment developed by Jean Bresson at Ircam, with whom I have already collaborated.
Several essays documenting the major research issues developed during the composition are also planned once the cycle has been ended.

In the Composer's Den: (my) music as sensory thought and other poetic considerations around the notion of "piano d'amore"

During this seminar, I will delve into some aspects of my piano music, giving pride of place to my Wiko project: the second book of my "Miniature Estrose", seven pieces for "piano d'amore" composed for Pierre-Laurent Aimard, a former Wiko Fellow.

"Book" refers to a collection of pieces that constitute a unity, but are not necessarily performed in sequence. Famous examples are Claude Debussys "Études for piano" (two books), or the nine books of Claudio Monteverdis "Madrigals". "Miniature" here does not mean short or small scale. It evokes, rather, the great detail of execution of the initial, highly ornamented letter of ancient illuminated manuscripts. The Italian word "Estrose" has no equivalent in other languages: it denotes not only imagination, fancy, creative intuition, inspiration, genius, but also extravagance, unpredictability, eccentricity (Antonio Vivaldi wrote 12 concertos in 1711 called "L'Estro Armonico"). Finally, "piano d'amore" is a term of my own invention, which will be explained in the seminar. It evokes the Baroque instrument "viola d'amore".

I will start by positing that music is primarily made up of sensory thoughts. Indeed, I think of music as a neural activity akin to, but independent of thinking with concepts. Musical expression depends on the organisation of a sound into larger significant units of sounds, or, as Edgar Varèse once wrote, music can be defined as "organised sound". For this reason, its raison dêtre is not to be discussed or understood, but to be experienced. To communicate sensory thoughts, the composer normally needs the mediation (interpretation) of performers. The composer notates imagined sounds with symbols that ought to trigger appropriate gestures by the musical performers, intended to generate the composer's original ideas. Sensory thoughts convey musical information and structure to the listeners, who react to them in a wide range of different, personal ways (feelings, movement, intellectual bliss, goose bumps, ecstasy, etc.).

After briefly showing a bottom-up approach how I composed sound using a piano in "Traiettoria" (written in 1982-4 for piano and computer-generated sounds), I will present the basic principles behind each of my "Miniature Estrose" and will analyse one of them ("Ninnananna") in detail using a top-down approach similar to a close reading.

I will frequently have to use two important, closely interconnected terms: material and form.
By "material" I mean the building blocks of a musical thought (which are already a micro-form): a chord or a sequence of chords, a rhythm, a melody, a special sound or texture, etc.

Form has at least three dimensions:

a. a set of historically defined constructing principles shared by artists at a given time (e.g. sonata, fugue, sonnet, haiku, still life, etc.).
b. the global outline of a work (its "phenotype"), perceived either by listening to the piece or analysing its score
c. the hidden structure of a work (its "genotype"), mainly accessible through close perusal, appropriate knowledge of the style and history, the analysis of the composer's sketches, or even a theory invented to account for a piece's features.

My presentation focuses on my piano music, and yet I think that the principles I will outline for my work on this instrument can be generalised to my music in general. I also hope that some of the ideas I will present would also apply to the work of other composers.

The world of percussion Grand jeu

In the Composer's Den: (my) music as sensory thought and other poetic considerations around the notion of "piano d'amore"