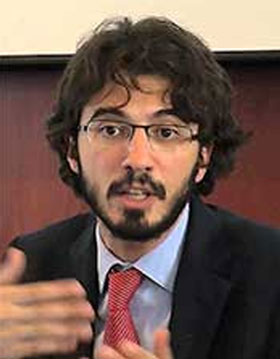 Born in 1977 in Madrid
Studied Law at King's College London, at the Université Paris 1 Panthéon-Sorbonne, and at Harvard Law School

Ongoing conflict in Iraq, Syria, Yemen, Libya, and Sudan. 15 years of civil war in Lebanon, 10 years of conflict in Algeria. Palestine still subject to colonization. In each of these countries, the United Nations and individual states have appointed international mediators, representatives, and envoys to resolve the difference between warring parties. Since 2003, the United Nations' Secretary General alone has appointed eight Special Representatives ('SRSGs') to Iraq. Thus far, it appears that none of their efforts have been successful. Most representatives and envoys remain in office for two years without making any progress towards peace. In some cases, critics have argued that international peace efforts have actually worsened internal conflicts. This raises a series of questions, including but not limited to how the international mechanism for peacemaking functions, why it functions in the way that it does, and why is it being perpetuated. Is another approach possible?

The social justice blind spots in the new Arab constitutions

The Arab Spring constitutions : for whose benefit?

The struggle for Iraq's future : how corruption, incompetence and sectarianism have undermined democracy

"Every conversation offers a chance"

Zaid Al-Ali in an interview with Katja Gelinsky

Irak 17 Years after the US-invasion: Foreign influence, its impact on the general population, and prospects for the future