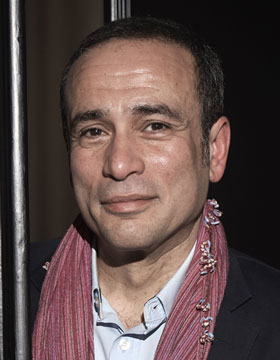 Born in 1967 in Cairo
Studied Political Science at Cairo University and Freie Universität Berlin and Development Studies at the International Institute of Social Studies, The Hague

Since 2013, four forms of anti-authoritarian platforms have shaped social activism in Egypt: (1) single-cause initiatives that oppose specific human rights abuses and advocate for the rights and freedoms of the victims, (2) professional associations that defend freedoms of expression and association, (3) student groups that are challenging the systematic interference of the security services in their affairs and the permanent presence of security forces on campuses, and (4) the labor movement that is galvanized by deteriorating economic and social conditions and by the government's repression of labor activists. In addition, spontaneous eruptions of popular anger in response to human rights abuses have become politically significant.
Young activists, students, and human rights groups have taken the helm of numerous single-cause initiatives. They often lack organizational capabilities and remain committed to a single cause related to human rights abuses, such as extrajudicial killings, forced disappearances, or torture in places of custody. Second, some professional associations have also been pushing back against the new authoritarianism on issues related to their autonomy and freedoms of expression and association. The Syndicate of Doctors and the Syndicate of Journalists in particular have taken on larger roles in the resistance since 2015. The resulting activism has restored pluralist politics to professional associations, created new spaces for the resistance of authoritarian policies and practices, and significantly increased popular awareness about the details of daily repression in which the government is implicated. Third, the Egyptian government's various repressive tactics have failed to vanquish student activism. Students have continued to hold protests and mobilize against pro-government candidates in student union elections. Fourth, despite security surveillance, forced dismissals of labor activists, and referrals of labor activists and protesters to military trials, labor activism remains at the forefront of societal resistance to authoritarian policies and practices. Unionized workers in public and private industrial facilities, as well as civil servants in the state bureaucracy and local government, continue to demonstrate and organize strikes to articulate their economic and social demands and to defend workers' rights to freedoms of expression and association. Finally, popular anger about specific government policies and practices has frequently erupted since 2013. Groups of citizens have taken to the streets mostly to protest the accumulating human rights abuses committed by the security services. These protests are different in that demonstrators are not part of discrete initiatives that have a lasting presence. The demonstrators rather come and go in response to various incidents of abuse.
As part of closing the public space and cracking down on civil society and opposition political parties, Egypt's new authoritarian regime has tried to manage these forms of social activism through repression, undemocratic legal frameworks, and aggressive judicial tools. However, the new authoritarian government has found it difficult to quash a robust and resilient activism scene.

Hamzawy, Amr. "Conspiracy Theories and Populist Narratives: On the Ruling Techniques of Egyptian Generals." Philosophy & Social Criticism 20, 10 (2018).
-. "Egypt after the 2013 Military Coup - Lawmaking in Service of the New Authoritarianism." Philosophy & Social Criticism 43, 4-5 (2017).
-. A Margin for Democracy in Egypt - the Story of an Unsuccessful Transition (in Arabic). Cairo: The Egyptian Lebanese Publishers, 2014.

Since the January 2011 Revolution, Egyptian human rights conditions have been shaped by three successive governments: the government of the Supreme Council of the Armed Forces (SCAF) between February 2011 and June 2012, the elected President Muhammad Mursi of the Muslim Brotherhood (June 2012 to July 2013), and the current administration of the former Minister of Defense, now President Abdul Fattah al-Sisi, who assumed power after the coup of July 3, 2013. With varying degrees of police brutality and abuse, all three governments relied on human rights violations to sustain their power. In todays Egypt, human rights violations have reached unprecedented levels.

The currently ruling military establishment is invested in restoring the autocratic continuity that was challenged in 2011. To do so, a new authoritarian doctrine is being introduced. Within the state apparatus, the military and security services are empowered to fully control civil society with little oversight. Undemocratic constitutional amendments and laws are being used to rescind established notions of the rule of law, thereby reducing trust in the impartiality of public institutions. Vague, broad language in new and amended laws - such as the Protest Law, NGO Law, Penal Code, Terrorism Law, and Military Court Law - is enabling the regime to arbitrarily prohibit or criminalize activities without definition, make accusations of terrorism without legal restraint, and transfer civilians to military courts. With legal backing, scare tactics and police brutality are being used regularly to deprive citizens of their freedoms of expression and association.

Facing this new authoritarian doctrine, four forms of democratic platforms have shaped social activism in Egypt: (1) single-cause initiatives that are opposing specific human rights abuses and advocating for the rights and freedoms of the victims, (2) professional associations that are defending freedoms of expression and association, (3) student groups that are challenging the systematic interference by the security services in their affairs and the constant presence of security forces on campuses, and (4) the labor movement, which is being galvanized by deteriorating economic and social conditions and by the governments repression of labor activists. In addition, spontaneous eruptions of popular anger in response to human rights abuses have become politically significant.

Egypts new authoritarian regime - as part of closing the public space and cracking down on civil society and opposition political parties - has tried to manage these forms of social activism through repression, undemocratic legal frameworks, and aggressive judicial tools. It has intensified its efforts to intimidate professional associations, student groups, and labor activists. And it has expanded its targets to include young human rights advocates and citizens who have publicly stood against police brutality. Nothing has highlighted this fact better than the large number of young activists and students detained and arrested, as well as the systematic referral of protesting workers to military trials.

Can Egypt's democratic hopes be revived?

Conspiracy theories and populist narratives : on the ruling techniques of Egyptian generals

Egypt after the 2013 military coup : law-making in service of the new authoritarianism