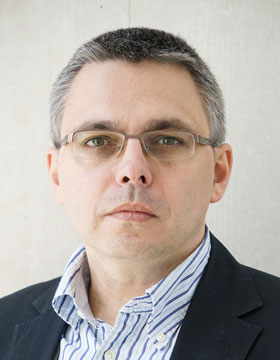 While working on my novels I have started writing stories about a civil war-torn city. It started off as a one-off, a story of a veteran of the conflict working as a guard manning an elevator in a church tower. This was based on one of my visits to Wroclaw, where indeed there is a rather industrial looking socialist style elevator mounted inside the cathedral. I finished the story, but kept returning to the location and realized that more and more of the stories were developing into intertwining mini-cycles featuring the same protagonists set in this fictional town, a mix of Wroclaw, Marosvásárhely, Munkacevo, Zagreb and Sarajevo.
It took a while until I realized that yet again, I am working on a novel, a novel exploring the complexity and fragility of peace and the different avenues of coping with the aftermath of a brutal ethnic conflict in which the warring factions have all committed crimes against humanity and the conflict is too complex and all too recent for historic consensus or even a shared narrative of the events to have developed.
In the book I will try to tell these manifold stories from conflicting perspectives shaped by very different views and experiences of the conflict, looking at it not just through the eyes of victims and perpetrators, but also acknowledging that the line between the two positions can often be muddled, while the trauma of the conflict and the psychological aspects of survival can lead to brutalization and self-brutalization, often creating circles of passion and self-hatred, where even reflection on the past may be hugely problematic and the possibility of reconciliation might be minuscule or bordering on the impossible.
Shrapnel will be a novel blown to pieces, a shattered narrative of a city frozen in explosion, exploring the long moment when the broken pieces are in the air and the consequence of the detonation is not yet wholly visible.

Exploding the Novel - the Big and the Small

Writing a novel can often feel like putting together the pieces of some broken artifact, like solving a puzzle, like building a machine.
Throughout my career, I have experimented with fragmented narration, often using very short texts and building mini-text cycles that in turn fuse into larger arcs creating bigger constructions.
In my talk, I will explore this technique, talking about various aspects of writing and creating a novel, focusing particularly on the relationship between smaller and larger structures.

Exploding the Novel - the Big and the Small