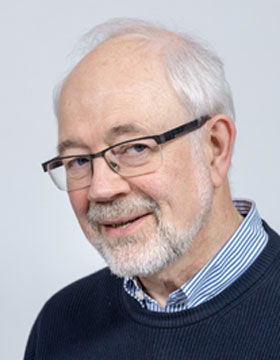 Born in 1951 in Rotterdam, Netherlands
Studied Biology at the Vrije Universiteit Amsterdam

I plan to continue exploring the boundaries of the lifetime commitment principle that I developed in previous review papers. My approach elaborates that the origins of major transitions to obligate multicellularity and colonial superorganismality can always be captured in necessary and sufficient conditions that emerge from Hamilton's rule. The lifetime commitment principle, also known as the lifetime monogamy principle for explaining obligate reproductive division of labor in the social insects, appears to have fundamental consequences for how we understand the progression of life's complexity over evolutionary time. Major transitions to higher levels of organic complexity are a ratchet-like process. When the ratchet will click cannot be predicted, but if it does it will produce a major transition that is irreversible. Secondary reductions of complexity may well happen, but genome-wide rewiring of developmental pathways makes reversals to ancestral lower-level complexity impossible. In this view, "coming together" in same-generation chimeras is a fundamentally different starting condition from "staying together" across generations. Only staying together can lead to permanent higher-level adaptive states of complexity via family selection, whereas (non-family) group selection is unable to achieve that for "coming together". George C. Williams rightly acknowledged the fundamental difference between family selection and group selection more than 50 years ago, but the later sociobiology tradition lost sight of this distinction that was in fact also intuitively clear to Darwin, Weismann, and the key architects of the Modern Synthesis of evolutionary biology. Capturing the lifetime commitment principle in verbal, diagrammatic and simple mathematical terms is an important overarching objective, both for my book project and for additional studies to be pursued during my stay at the Wissenschaftskolleg.

In our century of data-driven biology it is not always appreciated that biology has an encompassing theory of adaptation. In terms of what Darwin actually explained rather than conjectured, "The Origin of Adaptation" would have been a better title of his seminal book than "The Origin of Species". However, the theory of adaptation could not be completed until the key mechanism of inheritance became integrated in evolutionary theory during the early 20th century. The insight that genetics is particulate (binary) rather than some unspecified blending process spurred all modern developments in molecular biology. It also led to a new 'gene's eye' view of adaptation, which focuses on how genes maximize their representation in future generations by inducing small cumulative changes that promote their success in competition with alternative variants at the same chromosomal loci.

William D. Hamilton and George C. Williams independently established the 'gene's eye' view of adaptation in the 1960s. Hamilton's version, known as inclusive fitness or kin selection theory, became most influential because it explained reproductive altruism as a consequence of the expression of selfish genes (a metaphor coined by Richard Dawkins). The logic is summarized in Hamilton's rule, a simple inequality saying that any gene inducing reproductive altruism (helping someone else to reproduce) would spread if brs > cro. Here, cro is the gene-level opportunity-cost of not having offspring to which one is related by ro, and brs is the benefit in gene copies passed on to future generations via the offspring of siblings (or lesser kin) to which one is related by rs. Inclusive fitness theory makes many testable predictions of what social traits should have (or not have) evolved, which have been confirmed by empirical research with very high consistency.

Social insects have been prominent test beds for inclusive fitness theory because their workers remain often or always unmated, which leads to forms of sterility that only make sense if relatives benefit. Workers of insect societies are only conditionally unmated, but permanent unmatedness (Darwin's neuters) can make massive superorganismal colonies evolve. After introducing some general natural history, I will highlight the awesome social adaptations of fungus-farming leafcutter ants. I will then show that their superorganismal colonies are also frightening anomalies, because all individual agency ('freedom') that we normally associate with societies has been lost. Finally, I will discuss the most likely causal mechanisms that have induced evolutionary transitions from society to superorganism, including the close analogies with reproductive altruism among cells that gave rise to multicellular organisms.

Reconstructing the functions of endosymbiotic Mollicutes in fungus-growing ants

No benefit in diversity? : the effect of genetic variation on survival and disease resistance in a polygynous social insect