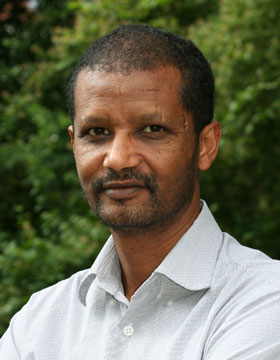 Born in 1972 in Mekele, Ethiopia
Studied Geology and Geophysics at Addis Ababa University and Earth and Planetary Sciences at the University of Nancy I

The objective of the research is to collect, extract, and systematize all available information on the climate of Ethiopia and the Horn of Africa during the late 18th to early 20th centuries from documentary sources. The collected data will be formulated in qualitative to semi-quantitative seasonal to annual time series on rainfall and temperature over the studied period. These time series will be used as stand-alone climate data to reconstruct the climate variability in the region and will serve as data for calibrating and validating longer time series on rainfall and temperature from natural archives, including speleothems, tree rings, and lake core records.
Many historical and geographical records contain observations and descriptions of features related to climate, and they frequently also include actual climate and weather observations. All possible sources, including books, diaries, letters, reports, newsletters, chronicles, and manuscripts, that deal with the 18th- to 20th-century history, geography, geology, etc. of Ethiopia and the Horn of Africa will be searched using all available means and facilities in the host institution/library, then sorted and prioritized based on the subjects treated. Identified sources will be read in chronological order, with all information related to weather phenomena, climate, and associated consequences recorded verbatim. Dates, locations, and contextual information will be recorded, sorted, and validated. These qualitative and quantitative climate indicators will be recorded and compiled as a seasonal and annual rainfall and temperature database. Qualitative observations to be recorded include accounts of weather events such as frost, hail, rain, fog, wind, and storms, together with information about river levels, crop/vegetation conditions, and other more general commentaries, including summaries of mean seasonal conditions and climatic impacts on crops, humans, and livestock. The seasonal/annual records of rainfall will finally be classified in categories such as "wet", "normal", "dry", and other extreme condition indicators like "drought", "severe drought", etc.
The results will be systematized and narrated in a monograph on "Historical climate of Ethiopia during the 18th to 20th centuries".

"Have you been blessed with the rains this season?" Reconstructing a Rainfall Index of the Ethiopian Highlands

The livelihood and subsistence of the Ethiopian population and the overall health of the Ethiopian agrarian economy depends entirely on the distribution and amount of rainfall. Though rainfall is very crucial for subsistence, the rain cycle in the country is spatially and temporally very erratic, leading to frequent moisture stress, drought and in some cases drought-induced famine. The significant topographic diversity of the country, as well as the relative position of the various agro-climatic zones with respect to the direction of moisture-carrying winds, amplifies the effects of the failure, scarcity or surplus of rainfall in a given year.

Forecasting the rainfall pattern has been a major challenge owing to the lack or scarcity of long instrumental records. On the other hand, reconstructing the rainfall regime at the highest possible temporal and spatial resolution is imperative, because even a slight variability in rainfall amount and distribution leads to a major shift in the hydrologic system and the vegetation regime in various localities.

Reconstructing a rainfall index of a long time-series from all available historical records in Ethiopia is therefore of great practical importance, as a long record of rainfall will help to better understand the rainfall regime in the country and possibly to predict drought cycles, which in turn will help to prepare for immediate impacts and eventually to planning long-term adaptation and mitigation strategies.

In my presentation, I will first introduce the physical palaeo-climatology aspect of my work, which will give a broad background to my current Historical Climatology research. I will then go through the methodology, as well as some critical analyses of the advantages and disadvantages, opportunities and limitations of this rapidly developing field of history/climatology. I will highlight the documentary sources I used to reconstruct the rainfall index and drought recurrence plots and the specific methodologies I used for extracting, systematizing and validating the data. Finally, I will present the results (reconstructed spring, summer and annual rainfall index) and preliminary conclusions.

Potential geoheritage sites in Ethiopia : challenges of their promotion and conservation

"Have you been blessed with the rains this season?" Reconstructing a Rainfall Index of the Ethiopian Highlands