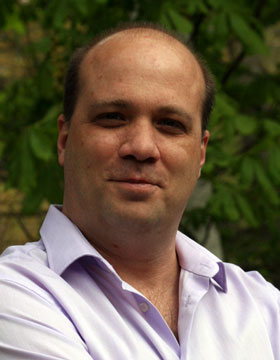 Born in 1973 in Budapest
Studied Biology at the Eötvös Loránd University, Budapest

Our behaviour, success and fate are partly influenced by the social group we belong to. And this is the same for many animals. Social network analysis helps to map, quantify and visualize these network effects, and currently it is becoming very important also for the study of animal behaviour. It can help to better understand how the group influences the individual, but also how the individuals form the group. I will study social networks of several animal species, perform comparative analyses on their structure and try to understand their diversity. Preliminary data and results suggest that there is a beautiful and massive variability here, ranging from prairie dogs to paper wasps and from lemurs to cows. A key question is what determines the shape of these networks? Modeling the relationship between form and function (between structure and dynamics) takes us closer to being able to make careful predictions as well. How will the group perform, given its structure? How successful will an individual be, given its position in the network? I will also look at the ecological correlates of social network structure. My task here is to clarify which are the most important factors that influence group structure. For example, is increased predation a cause or a consequence of changed network structure? This last question links social group dynamics to community dynamics: how can we link social networks in food web interactions between prey and predator species? Most of these problems can be set in parallel to human social dynamics: at the end of the story, we can discuss how natural the emergence of leadership in human groups is or which animal has social groups with a structure similar to human classrooms.

Networks of Networks: A Hierarchical-Systems View on Ecology

We live in the era of a new mass extinction event. Instead of trying to protect the rare species one by one, we need to develop more efficient and also more intelligent approaches. In systems-based conservation, we evaluate the importance of individual species in a systems-ecology context: we focus on the interaction network among species and we identify key interactors as candidate keystone species. Extinction is considered a sad event also because the surviving species will miss their earlier partner. While trying to better understand ecological interaction networks among different species, like food webs, there is an increasing interest in the internal structure of the interacting populations (like sex ratio, age structure, and various aspects of individual-level variability). This can shape and can be shaped by predator-prey interactions, so population-level and community-level processes can be intimately connected. One approach to understanding the internal structure of the prey or the predator species is to look at their social networks. The way individuals interact determines to some extent the success of the group: this can be quantified and potentially used as a non-invasive indicator (you do not need to dissect an animal in order to investigate who are its friends). We have a hierarchical system here: the whole social network (on the lower level) is only a single node in a food web (on the higher level). A bestiary of some really nice and exciting animal social networks will be presented; we will have an insight into their variability and discuss their ecological aspects. I will discuss the potential in linking individuals to populations and multispecies ecological communities and show how network analysis can help here. A very simplistic toy model will also be shown, but I admit it provides more questions than answers.

How can mature ecosystems become educated : a response to Watson and Szathmáry

How Can Mature Ecosystems Become Educated?
CellPress more publications in the Fellows' Library