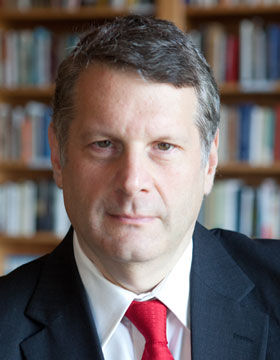 Albert Gallatin Research Excellence Professor of the History of Science

Born in 1964 in Paterson, New Jersey
Studied Molecular Biology and German Literature at Cornell University and History and Philosophy of Science at the University of Cambridge

1. Gene Patenting and Race and Genomics in Biomedicine in the US and Germany

Ad 1. My project uses the CCR5 gene as a heuristic tool to probe three critical developments in biotechnology from 1990 to 2010: gene patenting, HIV/AIDS diagnostics and therapeutics, and the relationship between race and genomics. The gene has enjoyed a rather fascinating history thus far. Behind it lies an interesting tale about intellectual property law: one company was able to patent the gene without knowing precisely what it did - even after listing the incorrect DNA sequence in the specification. It turns out that this gene codes for a receptor that is recognized by HIV-1, the virus responsible for AIDS. How has a patent on the HIV-1 co-receptor affected possible treatment? Just how does patenting affect healthcare costs, both in the US and abroad, particularly in poorer nations where the average annual salary can be an order of magnitude less than the drug's cost? This gene has a particular allele, which also made headlines. CCR5-32 is a deletion mutation in which the receptor never appears on the surface of the white blood cell. As a result, HIV-1 cannot recognize it, and therefore those who have two copies of this gene (i.e., are homozygous for that trait) are by and large immune to AIDS. Biomedical researchers immediately undertook investigations to see who the lucky ones were who possessed this allele. It became clear that there was a very wide range in allele frequencies, or the percentage of a particular group of people who are CCR5-32+. Soon biomedical researchers started asking whether or not the allele was race-specific.

2. The Role of Physics and Electrical Engineering in Shaping Musical Aesthetics in Germany During the Late 19th and Early 20th Century

Ad 2. During the early twentieth century, German radio broadcasting invested in the creation of electronic music. Berlin served as the center of this new music during the 1920s and '30s. The Heinrich Hertz Institute for Research on Oscillations and the Staatlich-akademische Hochschule für Musik, now part of the Akademie der Künste, were the sites of intense collaborations between physicists, electrical engineers, and musicians researching the technical and musical possibilities associated with the new medium of radio broadcasting. As a result, numerous electronic musical instruments were invented, such as the Trautwein's Trautonium, which contributed to a new musical aesthetic. This aesthetic subsequently influenced other electronic music movements throughout Europe and the US.

Biomedical Sciences and Society over the Past Twenty-Five Years: Patents, HIV/AIDS, and Race

For at least the past two decades, I have been intrigued by the relationship between nature and culture/society, the natural and the artificial, and scientific knowledge and other forms of knowing about the world. While I have spent (too) much time looking at the history of eighteenth and nineteenth-century German and British physical sciences, over the past few years I have turned to more modern material. Currently I am focusing on biotechnology and the biomedical sciences drawing upon my earlier training as a molecular and cell biologist some twenty-five (!) years ago.

Given those interests and an interdisciplinary audience here at WIKO, I thought I would tell a story that involves the recent history of a particular gene. Scientific objects have always fascinated me, as they enable one to reconstruct a different type of history. In this lecture, I shall use a gene as a heuristic tool to probe the boundaries between the biomedical sciences and society during the late twentieth and early twenty-first century. The gene on which I have been working has enjoyed a remarkable history thus far: it was the subject of a spirited and contentious patent dispute; it codes for the co-receptor of HIV, which is of course the virus responsible for the greatest pandemic of our time, and one of its alleles (or alternative forms of a gene) was found with an impressive range of frequencies around the world resulting in a number of biomedical researchers wondering whether to label it (in conjunction with a number of other DNA sequences) as a possible 'racial marker.' In short, this gene begins to shed light on three aspects of recent biomedical research, namely genes and intellectual property, HIV/AIDS diagnostics and therapeutics, and race and genomics. Clearly all of these themes are critical to society, and molecular biologists, sociologists, cultural anthropologists, lawyers, and historians should engage with these topics with an eye toward policy issues. In that spirit (time permitting), I shall discuss my role as a historian of science with the American Civil Liberties Union on a recent court case dealing with the patentability of genes.

The genealogy of a gene : patents, HIV/AIDS, and race Transformations: studies in the history of science and technology

Spectrum of belief : Joseph von Fraunhofer and the craft of precision optics Transformations : studies in the history of science and technology

Wireless Communication, Physiology, and Electric Music: The Trautonium in Berlin during the 1930s