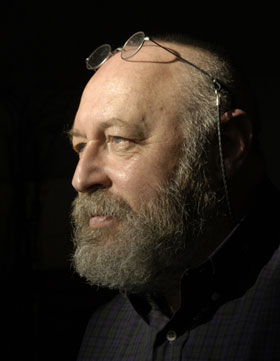 Where Every Stranger (is a Ghost). Novel

The novel interleaves five quite separate 300-page novels, alternating chapters between them (This functions as follows: if the novels are A, B, C, D, and E, the order of chapters is ABABCDCD, ABABCDCD, ABABCDCD, ABABCDCDEE, ABABCDCDEE, EEEEEE.). The five novels take place in different locations in space and time, from the 1st century to the 22nd, and from ancient Rome to deep space exploration. Gradually the books begin to interweave and come together in a single time and space. The connecting theme is the attempt to tame human violence.

On September 6 of this year I published a 700-page novel - three weeks ago, so the experience is still not quite real - that took 18 years to complete; it is the last novel of a quartet, entitled "The Heart Beneath", that began publication in 1989, but which started in note-form 20 years before that. The entire quartet, now complete, was re-published in the United States (and as e-books in the UK) as an entirety on September 6, and brings to a close my 48-year labours on what I think of as my lifes work - so far! During the making of "The Heart Beneath" I also wrote a dozen other novels, including a quintet of novels linked by characters who take the law into their own hands. This is the connecting theme of the "Justice" quintet, which begins with a novel by that name; in the quintet, the characters are all different, from novel to novel; in "The Heart Beneath", whose connecting themes link Britain and Germany, the stories work out the fate of characters who appear in all four books.

The project on which I am now embarking is unusual. It is a novel of 1500 pages - usually I have only a general idea of length, in advance, but this is for me a different kind of enterprise altogether. It consists of five 300-page novels, set in different times and places, from Ancient Rome to the distant future. The books appear not consecutively but in parallel, at first interleaved, and finally interwoven, as all five stories eventually gather in a single space and time. The form of the interleaving arrived in my head at once, while riding a Harley Davidson motorcycle through a hailstorm, during a 10,000-mile ride around the United States, in the summer of 2014. If the books are A, B, C, D, and E, then the order of chapters - each chapter is 30 pages long - is as follows (the order set out in our Arbeitsvorhaben is incorrect): ABABCDCD, ABABCDCD, ABABCDCDEE, ABABCDCDEE, ABABCDCDEEEEEE. Book E is the book in which the other novels ultimately coalesce. The connection to a sonnet rhyme-scheme, and to various musical forms which composer-friends have pointed out to me, is perhaps not entirely coincidental, since what directs the arrangement of chapters, as it does an arrangement of rhymes in poetry or song lyrics, is the economics, so to speak, of memory.

How to push through

Who was that lady?

Breakfast with Stalin : a play for radio

How to Push Through