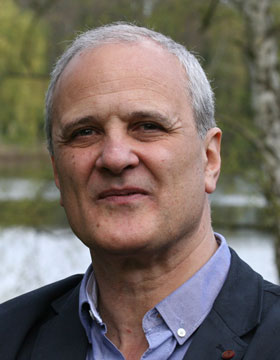 Born in 1957 in Mercedes, Argentina
Studied Architecture and History at the University of Buenos Aires

Ideas, Ideals, and Ideologies of the City in Latin America

The project will trace a history of representations of the city in 20th-century Latin America, studying the ways the city appears in social thought: as an idea, as a project, as a problem. At different times and in different cultural configurations, different approaches and definitions produce the variety of depictions of cities we find in cultural essays, social sciences, history, urbanism, and literary criticism. These depictions will be addressed as "analogous cities", that is, cities imagined by arts and literature, written by social sciences, or projected by architecture and urbanism, cities that coexist, one over the other, producing layers of meaning about the "real city". They reveal the close relations between cultural symbolizations, conceptualizations, and city building, showing the historical framework within which the city and its representations are mutually shaped. These "analogous cities" may also be thought of as a territory for the symbolic battles in which Latin American culture interacted with international debate. In this regard, the transnational flow of ideas has always accompanied urban life on the continent, and Latin American cities have repeatedly operated as a laboratory of Western thought. This was exactly the case in one of the episodes described in this project: the production of the idea of the "Latin American city" as a figure of social thought between the post-World War II period and the seventies. The project deals with the different meanings that the "city" began to possess in moments of enormous transformations of social life, politics, and culture in Latin America: the material city, which was growing rapidly because of massive rural migrations; the city imagined by a new agenda of the international social sciences, which placed its expectations for an accelerated modernization of the continent on urban development; and the city anathematized by the radical positions of political and cultural critique, which stressed its long-term domination of Latin American life. All this embodies an unusual moment of building a "Latin American urban culture".

Ideas, Ideals, and Ideologies about the City in Latin America

My project intends to mix two analytical perspectives that have defined my work as a cultural historian and that I had summarized in the form of two questions: How do we write the city? How do we think about Latin American urban culture? In the Colloquium I will deal with the two questions; in a first and shorter part, the question of urban cultural history per se, leaving more time to develop the way I am shaping my approach of Latin American urban culture. Here, I will make some brief remarks about this second aspect.

The project focuses on a particularly rich period in Latin America, from the 1950s to the 1980s, a cycle of intense transformations, both material and ideological, in which ideas about the city played an important - and still not very well known - role.

In the reconstruction of that cycle, my research is taking different directions. It follows the emergence throughout the continent of a network of figures and institutions that were under the command of the idea of "planning" - a worldwide crucial keyword from the 1930s on; it traces the anthropological debates on migration and urbanization and their implications for housing proposals and for the formulation of the very important notion of "marginality"; it gives a wider significance to the cultural frame built by historians and by literary critics to discuss the technocratic idea of the city that was intrinsic to the modernizing project.

One important assumption in this research is that these phenomena should be analyzed within the more general framework of the relationships between Latin American countries and the United States, in a period of the greatest expansion of the North American model of social science and planning (its theories, methods, and institutions) as a part of the expansion of the new political and economic global power of the United States. The emergence of the network of Latin American urban thought was related with a number of North- and Pan-American institutions, following a rapid path from reformism to the unfriendly climate of the Cold War.

So, these relationships may be thought of as a metaphoric back and forth journey between North and South, a process of movement and transculturation of ideas, people, and institutions that can be schematically seen in two phases: the first one, of expansion of new forms of Anglo-American urban thinking in the region (through the ideas of modernization and development), extends from the late 1930s to the mid-1960s; the second one, of retraction, rejection, and pursuit of alternative paradigms in Latin American thought (replacing development with dependency), extends from the mid-1960s to the 1970s in a process of increasing political and intellectual radicalization.

As you can see, the ideas and ideologies of this period of deep mutations describe a complete arc of positions, from modernizing reformism to revolutionary positions, changing the modernist confidence in the city as an agent of reform into utter suspicion about its role of domination. The "Latin American city" began as a laboratory of modernization theory, but, far from serving as a demonstration of it, it produced a radical revision of its postulates. Thus, the end of this historical cycle was produced by the conviction that the city no longer had a role to play as a transformative agent: after all, as the Cuban revolution seemed to have demonstrated, the social transformations would not come from the city, but from the countryside.

Pan-American routes : a continental planning journey between reformism and the cultural Cold War

The metaphor and the prototype : figures of the 'urban' in Samiento's imagination

Roles of periphery in Buenos Aires : from expanisve city to archipelago city