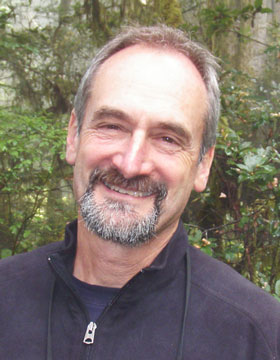 Professor of Ecology and Conservation Biology

Born in 1953 in Philadelphia, Pennsylvania
Studied Natural Resource Ecology at the University of Michigan, Ann Arbor, and Zoology at Miami University, Oxford, Ohio

My contributions to the Focus Group Causes and Implications of Adult Sex Ratio Variation in Vertebrates will be twofold: 1) focus on developing general models of the demographic origins of sex ratio variation using approaches I pioneered with two-sex matrix population models; and 2) determine the effects of adult sex ratio variation on fitness, infanticide, and population dynamics in a neotropical parrot through analyses of long-term data I have collected in Venezuela over the past 30 years.
Sex ratio - the number of adult males to adult females available to mate in a population - is thought to be an important driver of intra-sexual competition, sexual selection, and the evolution of sex differences. Skewed sex ratios arise from sexual differences in adult survival rates due to the cost of reproduction, skewed sex ratio at birth, sex-biased dispersal and immigration, and sexual differences in juvenile mortality. I hope to further the development of demographic models that can integrate these processes and evaluate their relative importance for sex ratio variation. I also plan to investigate quantitative approaches for estimating sex ratio with field data.
I will also explore the consequences of skewed sex ratios on population dynamics by understanding the effects of nonbreeders on population dynamics using data I have collected on the green-rumped parrotlet. One fascinating effect of a skewed sex ratio and a large nonbreeding population in parrotlets is infanticide. I will analyze the ecological and behavioral factors associated with infanticide in parrotlets and develop a model to predict when replacement mates should adopt or commit infanticide as a definitive test of Hamiltons rule.

The Lives of Others: Inside the Mean Streets and Nests of Parrotlet Society

"The world is full of obvious things which nobody by any chance ever observes."
(Holmes to Watson in "The Hounds of the Baskervilles", A.C. Doyle)

Humans usually begin life with a fascination for nature as children (i.e., biophilia) but often become homocentric as we mature, ignoring the life teaming around us and its importance to our existence. Perhaps as a result, few countries legally recognize the existence right of species. The strongest law in this regard, which has prevented hundreds of species extinctions, is about to come under siege - the U.S. Endangered Species Act of 1973. Conservation biology emerged in the mid-1980s as a crisis-oriented science with an explicit goal to conserve biological diversity and to forestall the untimely extinction of species. I "came of age" as an ecologist between these two events, and was drawn to a life of biodiversity discovery, science and conservation.

Birds - the 10,000+ species of living descendants of the dinosaurs - often pierce the armor of our everyday lives, as the many Wiko Fellows and staff who have asked me about our swans can attest. Usually conspicuous, sometimes beautiful, often melodious, and nearly always able to fly, birds engage us in many ways. Parrots play a special role in this regard. Colorful and loud, they are famous for their ability to learn human speech, possess unusually large brains, grow very slowly as nestlings, and can live for a long time. Although they are among the most endangered groups of birds in the world due to habitat destruction and capture for the pet trade, our knowledge of parrots comes primarily from their behaviors in cages, because studying them in the wild has been difficult to do.

I will introduce you to the work (the joys and the pains) of a conservation biologist, unravel the knowledge required to conserve a species, and take you on a tour to discover the secret lives of parrots as a picture develops before your eyes during the process of long-term research - 30 years of study of a small parrot (the Green-rumped Parrotlet) on a ranch in the llanos of Venezuela.

Parrotlets can be naughty or nice. Berlins dungeons, Cinderella, Shakespeare, and the Dead Kennedys could have been inspired by the acts committed in parrotlet society. Likewise for Mother Teresa, Harvey Milk, Phyllis Schlafly, and Pope Francis.

A variety of questions percolate from parrotlet lips as the plot of our long-term study unfolds: "Do nice guys really finish last?" "Is it a life style choice, or was I born this way?" "Whos my Daddy and whats my name?" "That didnt look like Pa, so where can we hide in this nest when he comes back?" "Who killed Baby Jane?" "Are you a Blood or a Crip?" "And why are there so damn many males anyway?"

In the end, our best detective work suggests that the answers to these (as well as many other universal questions in life) come down to love, desire, jealousy, and real estate. Along the way, we will build a model and throw in some maths, but I promise it wont take very long...

Historical connections between UC Berkeley, the birth of the US National Park Service and the growth of science in parks

Science, parks, and conservation in a rapidly changing world

The world is in a park : using citizen science to engage people in parks and build the next century of global stewards

A global perspective on parks and protected areas