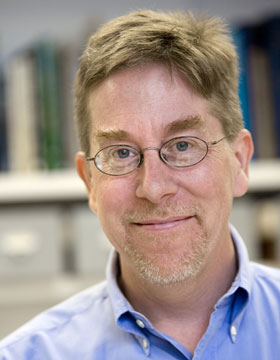 Born in 1961 in New York
Studied Biology at Harvard University and Biological Sciences at the University of Michigan, Ann Arbor

I am interested in the cascade of mechanisms that has given rise to the diversity of avian visual communication signals. These mechanisms include physical, chemical, physiological, cognitive, developmental, and evolutionary processes. These interests have led to previous research on 1) the nanostructure, physics, and development of structural coloration in bird feathers and skin, 2) the chemistry and physiology of avian plumage pigments, 3) the development and taphonomy of melanin pigments and melanosomes in feathers, 4) quantitative, tetrahedral color space models of avian visual perception, 5) phylogenetic analyses of the evolution of color space occupancy by various clades of birds, and 6) theory of aesthetic evolution by sexual selection. The long-term goal is an integrated understanding of the origin and maintenance of color signal diversity in birds.
I am particularly intrigued by evolution as an aesthetic process, especially through mate choice. I have been critical of the assumption that mate choice is an adaptive process that provides honest indicators of good genes and direct benefits. I have advocated a return to a genuinely Darwinian, fully aesthetic concept of mate choice and the use of arbitrary mate choice mechanisms as the null model of evolution by mate choice.
Aesthetic evolution focuses on the fact that secondary sexual traits - including color signals - function through the subjective experiences of the observers - the animals themselves. Subjective experience is the unique, internal quality - the "what-it-is-like" - of observing, cognitively evaluating, and making a choice. Mate choice is appropriately a science of subjective experience. The lack of a consideration of subjective experience has stunted the appreciation of mate choice as an aesthetic process and limited our capacity to understand the natural world.
My interests in aesthetic evolution have also led to new research in aesthetic philosophy at the interface of evolutionary biology and the humanities. I have recently published a paper proposing a coevolutionary aesthetic theory that spans the human and biotic worlds.

The Evolution of Beauty: From Warblers to Warhol

The talk introduces the broad framework of my research program on biological evolution as an aesthetic process. Sexual ornaments are biological features that evolve through the sensory and cognitive mating preferences of individual organisms. Most biologists propose that such mating displays evolve through forms of natural selection for displays that are honest indicators of mate quality. I propose that these adaptive mate choice mechanisms are insufficient to explain the complexity and diversity of sexual ornaments in the natural world. I expand upon Darwin's original view of mate choice as a mechanism of aesthetic evolution.

A fundamental feature of evolution by mate choice is the coevolution of mating displays with mating preferences for them. In biology, the fully aesthetic mechanism of trait preference is the appropriate null model - i.e. the hypothesis that must be rejected before adaptive explanations can be accepted.

Aesthetic coevolution is not limited to non-human animals, or to the context of sexual communication. Rather, the intrinsically coevolutionary dynamics found in many natural systems also characterize the process of aesthetic change in the human arts. In recent work, I have proposed a "post-human" aesthetic philosophy that spans biology, humans, human culture, and aesthetic genres. I define art as a form of communication that coevolves with its evaluation. Aesthetic coevolution can occur using genetic or cultural transmission mechanisms. Coevolutionary aesthetic change occurs with "Artworlds," i.e. populations of aesthetic producers and evaluators. Accordingly, many bird songs, plumages, flowers and fruits are non-human, biotic art forms that have evolved in their own independent Artworlds.

This framework supports a host of interesting and potentially productive solutions to major questions in aesthetic philosophy, art history, and art criticism. The goal of this aesthetic research program is not a reductive science of art, but rather a shared, intellectual tool box for the interconnected investigation of aesthetic phenomena across human and non-human species.

As humans have moved from the organizing center of the universe to an increasingly random place within it, we have gradually gained an enhanced appreciation of human uniqueness and our achievements. Likewise, moving humans out of the organizing center of the study of aesthetics will expand our appreciation of our uniquely human aesthetic complexity. This broadly interconnected (but not reductionist or synthetic) research program in aesthetics is a model for a productive relationship between science and the humanities in our increasingly technological and science-dominated culture.

The evolution of beauty : how Darwin's forgotten theory of mate choice shapes the natural world - and us

The Evolution of Beauty
Doubleday more publications in the Fellows' Library