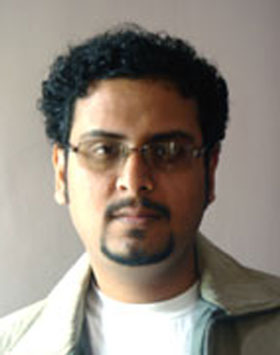 Born in 1980 in Kolkata
Studied Zoology at the University of Calcutta and at the Banaras Hindu University, Varanasi, and Ecological Sciences at the Indian Institute of Science, Bangalore

I would like to do an extensive review of chemosensation in the living world for understanding how specialized chemosensory systems like smell and taste evolved from a general chemosensory system. I have not come across any review that considers the evolution of chemosensation as a whole. This topic is an extension of my present work where I am finding that the boundaries between taste and smell may not be as distinct as commonly believed. My hypothesis is that the need for communication between different unicellular organisms (as is seen in some bacteria and amoebae) followed by inter-cellular communication that arose with the rise of multicellular life set the stage for specialization of chemosensory systems to detect very low levels of chemicals. An important factor is the evolution of terrestrial life. In aquatic organisms, it is not always clear as to whether separate olfactory and gustatory systems exist, and I surmise that the ability to detect very low levels of chemicals became more enhanced with the rise of terrestrial life, leading to specialized olfactory systems tuned to detect airborne chemicals. Another area I want to explore is artificial chemosensation. The information gained about chemosensation in animals can be exploited to make biologically inspired engineering applications. For example, it has been estimated that 1 mg of the trail pheromone of a species of ant can be used to lead a trail of ants around the world. If such level of sophistication can be incorporated into an electronic system, it will be a great advancement for artificial chemosensors. Hence I want to spend some time in comparing the mechanisms of biological chemosensation with the methods that are being tried out to build artificial chemosensors. This will help me to develop ideas about exploring new ways of proceeding with this line of work in the field of biomimetics and bio-inspired engineering.

Chemical communication in Ropalidia marginata : Dufour’s gland contains queen signal that is perceived across colonies and does not contain colony signal

Regulation of reproduction in the primitively eusocial wasp Ropalidia marginata : on the trail of the queen pheromone