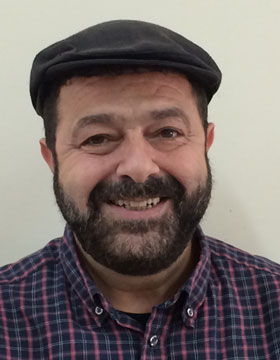 Adalah - The Legal Center for Arab Minority Rights in Israel

Born in 1964 in Nazareth, Israel
Studied Law and Philosophy at Tel Aviv University and International Human Rights Law at the American University, Washington College of Law

Past, Present, and the Rule of Law: the Legal Status of Palestinian Citizens of Israel

My project is to conduct research for a book about Israeli law and Palestinian citizens of Israel. For this project, I will analyze Israeli law, including Supreme Court case law, regarding the civil and political rights as well as the economic, social, and land rights of the Palestinian citizens. The research will also examine group rights protections such as for language, culture, and religion. The special significance of this book is that there is no thorough, updated, legal research analyzing the legal status of the Palestinians in Israel. Comprehensive legal research, which covers the Palestinian citizens' fundamental rights (as individuals and as a national community), will add significantly to the understanding of their citizenship and political status in Israel. My methodology will include examining the constitutional foundational values of Israel, as laid down in 1948-1949 with the state's establishment, and assessing their influence and effect on the law regarding the Palestinian citizens' status in the past and in the present. Since there is no national reconciliation yet between Israel and the Palestinians, and thus there is no "new beginning", the constitutional principles and values set forth at the state's foundational moments are significant for any constitutional discussion regarding the Palestinians' citizenship and national minority rights.

Jabareen, Hassan. "Hobbesian Citizenship: How the Palestinians Became a Minority in Israel." In Multiculturalism and Minority Rights in the Arab World, edited by Will Kymlicka and Eva Pföstl, 189-218. Oxford: Oxford University Press, 2014.
-. "Transnational Lawyering and Legal Resistance in National Courts: Palestinian Cases Before the Israeli Supreme Court." Yale Human Rights and Development Journal 13, 1 (2010): 65-83.
-. "The Future of Arab Citizenship in Israel: Jewish-Zionist Time in a Place With No Palestinian Memory." In Challenging Ethnic Citizenship: German and Israeli Perspectives on Immigration, edited by Daniel Levy and Yfaat Weiss, 196-220. New York: Berghahn, 2002.

Current theoretical literature emphasizes two dominant perspectives regarding the role of lawyering. Relying on Max Weber, the starting point of the first perspective is that legal systems rationalize state authorities. Scholars affiliated with the Critical Legal Studies approach claim that since law shapes our consciousness and due to professional constraints, lawyering contributes to legitimizing existing power relations. The margins of any public order are wide enough to allow the Court to sometimes accept victims claims; however, in these cases, the Court also justifies the public order. Thus lawyering may put victims struggles under risk, as it cooperates with constituting a false consciousness of impartiality and fairness.

The second perspective, which is affiliated with the Law and Society approach, rejects the top-down methodological analysis. It contends that any examination of the role of lawyering should start from the bottom-up, moving from society to the law. Based on empirical research, scholars who take this approach argue that "cause lawyers", lawyers who defend civil rights causes, in fact empower victims struggles and contribute to social change. These lawyers are not constrained by the professions limitations, they push and challenge boundaries, and their functions go beyond formal representation to supporting victims causes.

I will contend that these two divergent perspectives do not adequately account for the complexity of lawyering in conditions of ethnic/national conflict, or for how such conditions of conflict shape identities of belonging. While the judiciary may possess the victims trust and litigation may itself legitimize the public order, one cannot conclude as a consequence that the victims will also perceive the public order as legitimate, regardless of what lawyers do in court. Further, these two perspectives neglect the role of the international arena, which is dominant in such conflicts. This arena may also turn the subject of legitimation itself into a more complex question. I will suggest that legitimacy under ethnic/national conflicts is not a matter of causality: it neither depends on local legality or on the efficacy of cause-lawyers.

To make my point, I will examine the public effect of two major litigations that were brought before the Israeli Supreme Court and which challenged two different public orders. One case was initiated by Palestinians living under Israeli Occupation; the other concerned the Palestinian citizens of Israel. Although focused on cases argued before the Israeli Supreme Court, the discussion will also draw upon comparative research.

Hobbesian citizenship : how the Palestinians became a minority in Israel

On legal advocacy and legitimation of control

Collective rights and reconciliation in the constitutional process : the case of Israel

The future of Arab citizenship in Israel : Jewish-Zionist time in a place with no Palestinian memory