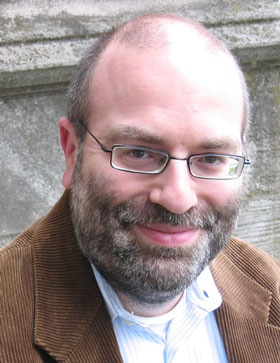 Albert Einstein taught at the German University in Prague from the late spring of 1911 to the summer of 1912. This particular sojourn has not greatly impressed his biographers. Einstein had passed through his annus mirabilis in Switzerland in 1905, and he would not hit on the right track for his theory of gravity, General Relativity, until his return to Zurich from Prague. This year, Einstein's first as a full professor, is relegated to a few paragraphs at best, largely consisting of quotations about how much Einstein disliked his time there. Historians of Prague likewise have little to say about this epoch, sandwiched as it is between the high drama of the Czech Renaissance of the late nineteenth century, on the one hand, and the Great War and the creation of the First Republic of Czechoslovakia, on the other. This project aims to take this relatively unremarkable period and deploy it to two ends. First, the relative quiescence of this period for Einstein and for Prague - both extremely well documented historical entities - provides the potential for a counter-history of these two subjects that are most often treated teleologically (toward General Relativity and world fame for Einstein; toward a monoethnic and monolinguistic nation-state on the other). Second, although Einstein's social and scientific contacts in Prague were minimal - the German University, which had been created alongside the Czech University in 1882, was relatively isolated, and Einstein learned no Czech - one can still follow the tracks of the few he did make to paint a series of portraits of Prague as a scientific city across several centuries, ranging from the foundation of Charles University, to Tycho Brahe and Johannes Kepler's collaboration in the Rudolfine city, to the scientific careers of both Christian Doppler and Ernst Mach, to the fate of Jewish scientists in the Czech Holocaust, to the growth of the philosophy of science in both the United States and the Soviet Union.

Michael D. Gordin. Scientific Babel: How Science Was Done Before and After Global English. Chicago: University of Chicago Press, 2015.
-. The Pseudoscience Wars: Immanuel Velikovsky and the Birth of the Modern Fringe. Chicago: University of Chicago Press, 2012.
-. A Well-Ordered Thing: Dmitrii Mendeleev and the Shadow of the Periodic Table. New York: Basic Books, 2004.

Einstein in Bohemia: Choose Your Own Worldline

From the Spring of 1911 to the Summer of 1912, Albert Einstein (1879-1955) was professor of mathematical physics at the German University in Prague. This episode has not enormously impressed his biographers. Neither his duration in this position nor the physics he produced while there - some abortive starts toward the general theory of relativity, whose centenary (and publication in Berlin) was celebrated this past November - seem to require much comment. Einstein disliked his stay in Prague, and rarely mentioned it afterward. Indeed, the Collected Papers of Albert Einstein does not even mark it, partitioning his career into "the Swiss years" (1900-1914), "the Berlin years" (1914-1932), and "the Princeton years" (1933-1955). (Prague is implicitly assimilated into the first.) Of course, Einstein did not know in advance that he would leave Prague after three semesters; nor did he know that his first effort toward a gravity theory would prove unsuccessful. Prague was the beginning of a new epoch, until it wasnt.

This project starts from Einsteins light footprint in the Bohemian capital and then radiates outward across multiple story-paths, or "worldlines," that turn out to be more about Prague than about the young physicist. By tracing the historical pasts and futures inflected through Einstein, we uncover a picture of Prague that is rather less mystical and Golem-ridden and significantly more rationalist than the typical Baedeker presentation. The stories run from the fourteenth century to the late twentieth, and touch on politics, literature, science, philosophy, Czechs, Jews, Germans and more.

There are too many stories to share in this abstract, or even in the colloquium, and I simply cant make a choice among them. You will do that. After a short introduction to the person, the place, and the method, I will ask the room to vote among which worldlines we will trace, which paths up and down the historical web of associations we will follow. That way, well all be surprised.

Scientific Babel : the language of science from the fall of Latin to the rise of English

How reason almost lost its mind : the strange career of Cold War rationality

The textbook case of a priority dispute : D. I. Mendeleev, Lothar Meyer, and the periodic system

The pseudoscience wars : Immanuel Velikovsky and the birth of the modern fringe

Red cloud at dawn : Truman, Stalin, and the end of the atomic monopoly

A well-ordered thing : Dmitrii Mendeleev and the shadow of the periodic table

The Limits and Possibilities of Narrative Explanations