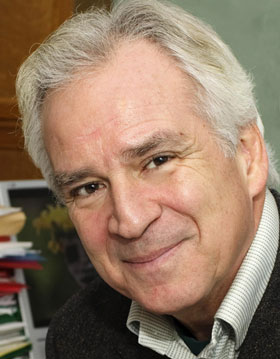 The Emergence of Meaning from Cooperative Communication: Towards an Evolutionary Theory of Semantics

Theories of language evolution tend to focus on syntactic structures. In contrast, I plan to study the evolution of semantics. Based on my earlier analyses of the connections between the evolutionary basis for cognition, collaboration and communication, I want to work on some topics that are important for the evolution of semantics: division of labour; collaboration for future goals; and the foundations for conventions and contracts. There are two kinds of cooperation typical among humans: cooperation towards future goals and indirect reciprocity. Reciprocal altruism ("you scratch my back and I'll scratch yours") is found in several animal species. Indirect reciprocity is a more extreme form of altruism: "I help you and somebody else will help me." The game-theoretical conditions for this to evolve as an evolutionarily stable strategy have recently been modelled. The crucial aspect for my argument is that these conditions presume complex forms of intersubjectivity and communication.
The central cognitive requirement for conventions is that they presuppose enduring joint beliefs or common knowledge. In general, joint beliefs form the basis for much of human culture. Commitments and contracts are special cases of cooperation about the future involving joint beliefs. When you commit yourself to someone to do some action, you intend to perform the action in the future; the other person wants you to do it and intends to check that you do it; and you and they have joint beliefs concerning these intentions and desires. Commitments cannot arise unless the agents have the capacity for cognitive foresight and can form joint beliefs. A contract also depends on the possibility of future sanctions.
For the semantic theme, I build on a cognitive model of events that I have developed together with Massimo Warglien and use it to explain thematic roles and the emergence of word classes as semantic structures. This will generate cognitively motivated constraints on semantics and syntax. I utilize this event model to analyse the communicative functions of different word classes. I will combine this analysis with the results of the analysis of cooperation. The objective is to show that the communicative demands of planning for future goals, for indirect reciprocity and for the formation of contracts motivate the natural division of the symbols used in communication into nouns, verbs, adjectives etc. Thus my goal is to show how the evolution of semantics, rather than syntax, can provide a cognitive grounding for the word classes that are found in almost all languages. Furthermore, the thematic roles that have been in the focus of much research in linguistic semantics will turn out to be natural components of the event model. Thus, the event model will be central in deriving semantic and probably also syntactic constraints on a language. My work in the development of these analyses will tie in closely with the themes of Holger Diessel and Luc Steels.

Coevolution of Cognition, Cooperation and Communication

I propose an ecologically based answer to why humans are the only animals who have developed a symbolic communication system. My argument is that hominin cognition, cooperation and communication has co-evolved.

As regards cognition, I focus on the hominins ability to plan future goals (prospective planning) and their mindreading abilities. I introduce five domains of intersubjectivity: emotion, desire, attention, intention and belief. I discuss recent studies on the prospective planning of animals and point to the connection with episodic memory.

There are many forms of cooperation, some of which humans share with other species. The capacity for planning future goals and the open ecology of hominins unbolted the cognitive niche that made for cooperation in the cause of future goals; such cooperation requires a complex intersubjectivity that among other things entails joint intentions. I then analyze the cognitive and communicative conditions for reciprocal altruism that can be found in certain species as well as indirect reciprocity, which is a form of cooperation seemingly unique to the hominin line. I present a game-theory model for the evolution of an indirect reciprocity that depends on the reputation of an individual within the group.

As regards communication, my first thesis is that cooperation to achieve future goals requires displaced symbols (not necessarily vocal) and that this form of cooperation led to the evolution of a protolanguage. My second thesis is that the reputation-mechanism required for indirect reciprocity led to the first stages of a language with syntax.

I conclude by asking what empirical evidence can be used to back up the model that I am proposing. Apart from questions concerning the ecological conditions, I discuss social phenomena such as division of labor, alloparenting, teaching and cooperative hunting. As an example I shall argue that 300,000 year-old spears and horse skeletons found in Schöningen indicate that Homo heidelbergensis was already using some form of symbolic communication.

The role of cooperation in the evolution of protolanguage and language

Event structure, conceptual spaces and the semantics of verbs

The cognitive and communicative demands of cooperation

How homo became sapiens : on the evolution of thinking

Conceptual spaces : the geometry of thought A Bradford book