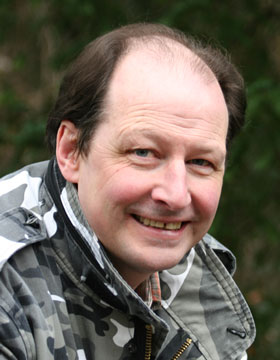 "Brilliantly changeable or metallic colors are among the strongest factors in animals' concealment" (Thayer 1909).
Read in the light of 100 years of research on animal and military defensive colouration, this statement by the father of camouflage theory now seems absurd. Camouflage works by blending with the background, disruption of form or mimicry of irrelevant background objects. Iridescence on the other hand is a form of structural colour  an optical phenomenon that usually produces vivid metallic colours, as seen in peacock feathers and morpho butterflies. While there has been some discussion of iridescence as camouflage, this has primarily been in terms of the mechanism of background matching, which ignores the primary feature of iridescence: it changes its hue at different viewing angles. The aim of my project, in line with a new major UK Research Council grant, is to determine if this changeability can function as camouflage, by disrupting object identification and/or interfering with targeting and attack.
Why bother?
Camouflage is interesting
- to biologists: The major selective force shaping the evolution of camouflage is perception by other individuals, of the same or different species. However, our understanding of which perceptual mechanisms animal camouflage "exploits" is limited.
- to psychologists: How you "break" camouflage revolves around two major issues in visual perception, target-background segmentation and feature "binding".
- to computer scientists: Researchers in artificial vision must tackle the same issues: feature detection, feature binding, target-background segmentation, and object recognition.
Apart from addressing fundamental questions about biological structure and function, an understanding of the ways natural iridescence is deployed to attract, deceive and distract will help inform the strategic use of such materials in safety, commercial and security applications.

Animal camouflage provides some of the most striking examples of the workings of natural selection; it has also long been an inspiration for military camouflage design, with the pioneers of camouflage theory being both artists and natural historians. While the general benefits of camouflage are obvious, understanding the precise means by which the viewer is fooled represents a challenge. This is because animal camouflage is an adaptation to the eyes and mind of another animal, often with a visual system different from (and sometimes superior to) that of humans. A full understanding of the mechanisms of camouflage therefore requires an interdisciplinary investigation of the perception and cognition of non-human species, involving the collaboration of biologists, neuroscientists, perceptual psychologists and computer scientists. I review the various forms of camouflage from this perspective, illustrated by the recent upsurge of experimental studies of long-held, but largely untested, theories of defensive coloration.

Olfactory camouflage and communication in birds

Stripes for warning and stripes for hiding: spatial frequency and detection distance