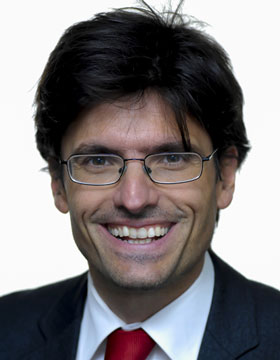 Born in 1975 in Istanbul
Studied Chemistry at Bogaziçi University and at the University of
Michigan, Ann Arbor

Evolution of Microbial Interactions and the Underlying Cellular Networks

How can we explain the evolution of cellular responses, which require an orchestrated interaction of a multitude of proteins, genes, and small molecules? How could these "cellular systems" have emerged over evolution, when their resulting responses seem impossible to achieve with fewer components? What are the "intermediary" molecular systems and how did they behave dynamically? What is, or could have been, the impact of biochemical realities (e.g. the spatial aspects of cells, the stochastic nature of biochemistry) on evolution at this molecular level? These questions about evolution on the level of cellular systems lie at the core of understanding evolution of any higher levels (e.g. species). Answering them, however, is far more difficult than answering evolutionary questions on the organismal level; we lack any fossil record on molecular systems and our ability to document existing diversity across organisms is hampered by technical difficulties of collecting detailed molecular level data (e.g. interaction maps, reaction kinetic rates). The impact of deciphering the "evolution of cellular systems" could go beyond evolutionary biology; it would allow a deeper understanding of cellular systems and increase our ability to manipulate these for engineering and medical purposes.
My work at Wiko will focus on specific sub-themes within this broader context of understanding the evolution of complex molecular systems as explained below. One area that I would like to highlight in this abstract relates to the evolution of metabolic networks and the microbial interactions they enable. Metabolism is one of the best-characterized aspects on the cellular level. The evolutionary factors shaping metabolic systems and their regulation, however, are not clear. Several factors can be at play at the same time, including environmental fluctuations in metabolite availability (i.e., fluctuating selection) and biochemical tradeoffs relating for example to redox balance, toxic intermediates, and substrate availability. At Wiko, I will aim to extend existing theoretical frameworks for modeling evolution to account for such factors. My focus will be on the analysis of those features of metabolic networks that enable or shape interactions on the species level, i.e., within microbial communities.

Synthetic Biology is a recently emerging field that aspires to design de novo biological systems using engineering principles. The process of rational engineering through combined application of modeling and experimental tools is expected to provide insights into biological function and structure, while the resulting systems can lead to novel applications in biotechnology, biocomputing, and biomedicine.

The grounding rationale of synthetic biology is rooted in a strong desire to "engineer" biology through the use of engineering principles, however, it is not clear what these principles should cover in the context of biology. They are clearly expected to include those that are well-established in other engineering disciplines (e.g. computer-aided design, standardization, and modularity), but are also in need to expand to meet the challenges and potentials arising from the unique features of biological systems.

The talk will be focused in two parts. On one hand, I will aim to illustrate how an evolutionary viewpoint can provide insights on which of multiple functionally-equivalent designs might be most amenable to implement in a given biological system. On the other, I will explore how functions that are not easily implemented (or imagined) under simplistic engineering viewpoints, can be implemented through designs that are understood from an evolutionary standpoint. These two parts are set in the context of example studies of cellular signaling networks and microbial communities respectively. At Wiko, my project links and expands to these viewpoints and focuses on developing a evolutionarily motivated theoretical framework for understanding and engineering microbial communities from a metabolic basis.

Bistability in feedback circuits as a byproduct of evolution of evolvability