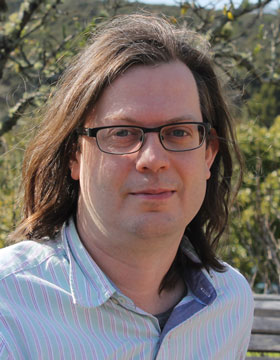 The capability to respond to stimuli is one of the defining features of life. The gap between stimulus and response in living beings is filled by regulation. Regulatory interactions between biochemical compounds allow us to detect stimuli and trigger cellular changes that ultimately give rise to a response that is observable on the level of the organism. Appropriate responses are advantageous for living beings in that they allow them to detect and adjust to the threats and opportunities provided by a given environment. Regulation is therefore of substantial interest for evolutionary biologists.
The core of my research project is to understand the evolution of regulation in the context of microbial metabolism: What are the specific costs and benefits of metabolic regulation? How do evolutionary forces shape patterns of regulation? And, conversely, do regulatory interactions influence evolutionary processes? These questions are addressed by combining computer simulations of evolutionary scenarios for the emergence of regulation with laboratory experiments on microbes.

There is increasing concern that a large fraction of experimental findings published in the scientific literature cannot be reproduced, and it has been argued that this lack of reproducibility comes at tremendous economic costs. An absence of formal mechanisms for a community-wide assessment of the reproducibility of published findings means that individual researchers have to rely in this critical issue on their own judgement and information. In my report I will discuss how prediction markets and decision markets can mitigate this problem. My report will include an introduction to the relevant theoretical frameworks behind these mechanisms: game theory and mechanism design. (It will be an informal, playful and interactive introduction - bring some cash to actively participate!)

Using prediction markets to estimate the reproducibility of scientific research

Cooperation and competition in the evolution of ATP-producing pathways