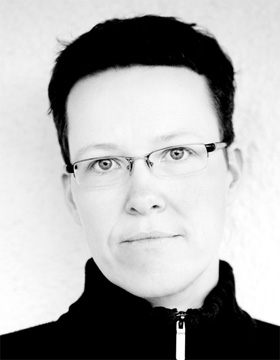 Born in 1969 in Oslo
Studied Russian and Classical Philology at the Universities of Bergen, Bonn, and Moscow

During my stay at the Wissenschaftskolleg I will work on a project at the intersection of sociolinguistics and cultural studies, planned as a book-length study entitled "Language on Display: Linguistic Culture in Contemporary Russia". In a period of linguistic liberalization, instability and change, post-Soviet Russia is characterized by the language question permeating all spheres of social, cultural and political life. The book follows the development of the language in post-perestroika Russian culture, the debates surrounding it and the wide range of responses and interpretations it receives within the diverse spheres of the linguistic community. The focus of this project is original in that it includes not only explicit linguistic reflections in the contexts of language debate, language legislation or linguistic codification, but also implicit responses in the realm of literary genres and other concrete linguistic practices, such as online language usage and linguistic humour. The book sets out to explore the multifaceted instances of such performative metalanguage.
Language's reflexive capacity has received considerable attention within various branches of linguistics, semiotics, anthropology and psychology over the past few decades, and recent reviews of metalanguage as a concept have taken the field to a new level, in particular as regards its social and ideological framing. However, while sociolinguists are aware of language's strong reflexive component in general, and appreciate the close connection between reflexive and poetic language in particular, performative metalanguage - statements about language communicated through a concrete linguistic practice - has not yet been the object of systematic exploration. Meanwhile, I believe that such study is crucial both for our understanding of the linguistic and socio-cultural dynamics of any society and for advancing our grasp of the theoretical concept of metalanguage.

Language on Display, or: What is Performative Metalanguage?

The fact that we can use language in order to say something about language itself is fascinating in our everyday life with language and challenging for linguistic research. How can we pin down and describe the reflexive dimension of language? Moreover, how can we account for it if it is not expressed explicitly? For it can be, but doesn't need to be. The kind of metalanguage that is not expressed explicitly, I propose to call performative metalanguage. Performative metalanguage amounts to statements about language communicated through a concrete linguistic practice, a display or representation of language.

In this talk, I'd like to present to you my understanding of performative metalanguage and give you some examples of the ways in which it can be studied. My project has a theoretical ambition - to contribute to the understanding of metalanguage in sociolinguistics (sociolinguistics is the part of linguistics that explores and explains the relationship between language variation and society). But I also have a strong (perhaps even stronger) empirical interest, in studying concrete manifestations or cases of performative metalanguage in Post-Soviet Russia, in other to present a fuller account of the language situation in Russia than is usually done.

“A revolution for Russia’s words” : rhetoric and style in Mixail Šiškin’s political essays

Language on display : on the performative character of computer-mediated metalanguage

Simultaneity of the non-simultaneous : on the diachronic dimensions of language in Sorokin

'A stroll through the keywords of my memory' : digitally mediated commemorations of the Soviet linguistic heritage

Footnotes of a graphomaniac : the language question in Evgenii Popov's The true story of "The green musicians"