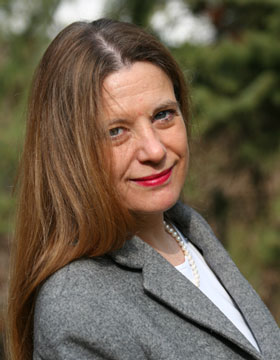 Born in 1961 in Lille, France
Studied Comparative Literature at the Ecole Normale Supérieure and the Université Paris 7-Denis Diderot

My book project is devoted to the role of natural disasters in the formation of collective memory in Europe on the local, national, supranational levels. This enquiry, which focuses on the early modern period, will also extend into the 19th century.
As a number of contemporary sociologists, philosophers, and political scientists have pointed out and even criticized, the 21st century sees a renewal of a "catastrophisme" that models our relation to the present. With my examination of how and why we historicize natural disasters in the modern era, I hope to relocate the questions raised by the contemporary context.
The drive to record catastrophes as historic events in the collective memory becomes evident at the beginning of the 17th century. It manifests itself in the appearance of a number of important historical accounts and in the construction of commemorative monuments. This inscription in long-term collective history happens thanks to numerous editions and re-editions of former accounts, sometimes recycled in fiction.
To transform a natural disaster into a historic event susceptible of being celebrated is to confer a meaning upon it. I will show the ideological stakes of this process and how the universal and repetitive dimension of catastrophe enables us in the modern era to forge a collective awareness encompassing a space broader than the particular point of the catastrophe. Fiction contributes powerfully to this encompassing process by investing the catastrophe with an ethical and empathetic dimension.
The study of the different means employed in the structuring of the catastrophe as an event, beginning in the 17th century, remains relatively unexplored. This project will open new avenues of research by connecting the appearance of an aesthetic approach with a new relationship to a multidimensional history (sacred, secular, natural, human, local, national, European, planetary).

Here is an extract from a song written the same day as the assassination of the Charlie Hebdo cartoonists:

7 January 2015, I have no desire to go to bed
I prefer to take pen in hand because this evening I am Charlie . . . .
This evening I am writing for you because I dont know how to draw
Let 66 million have the same idea
And may their own ink cartridges never be empty
Let us leave indelible traces so that the future shall know
That their talent and their courage lives not only in our memories
Writers, lyricists, illustrators, graffiti artists
Musicians, poets, painters and sculptors
Celebrities, unknowns, professionals and amateurs
Let us ensure that this momentum will find a posting far beyond Twitter . . . .
It is up to us to take up our pencils so that their struggle should have a meaning . . . .
But no matter what happens, I have pen in hand because this evening I am Charlie

For the French rapper Grand Corps Malade the role of the arts is self-evident - all the arts, in concert, are to be mobilized so as to remember, to transmit memories, to themselves take up the fight, to create a point of collective identification - "I have pen in hand because I am Charlie." It is an entire people, whatever their skills, who are supposed to respond through writing, images, music, sculpture . . . Our era does not question what has become the invariable coupling of historical or natural catastrophes (Fukushima and Katrina gave rise to a flood of works . . .) and artistic practices legitimated by the objectives of political engagement or fund-raising.

It is this relationship between catastrophes, memory and the arts that I propose to explore by focusing on natural catastrophes, unloved by historians. It is indeed a paradoxical relationship - natural catastrophes are fated to be forgotten and effectively are - as can be sufficiently perceived in the questionnaire that I undertook with the assistance of those residing and working at the Wissenschaftskolleg this year. But natural catastrophes arouse - in a different fashion depending on the cultural space and the era - multiple artistic responses and memorial enterprises, sometimes of very great magnitude, entailing significant collective investments over a number of years. Moreover it is often in endowing them with intentionality, in associating them with political issues, in cross-referencing them metaphorically with catastrophes of another kind (historical) that one is able to prolong their memory, through the mediation of cultural artifacts.

It is in a diachronic and comparative fashion that I propose to ponder the different modalities in the relationship between natural catastrophes, collective memory and the arts. I hypothesize that there are three different regimes of the historicity and artification of natural catastrophes extending over a long period (fourteenth through the twenty-first centuries). This proposition is based on European and Western history while drawing comparisons with other areas of the world.

This presentation constitutes a shorter version of the first part of the book that I am writing during my stay at the Wissenschaftskolleg.

Catastrophes to come : what can literature tell us?

Catastrophes to com : what can literature tell us?

Narratives of catastrophe in the early modern period : awareness of historicity and emergence of interpretative viewpoints