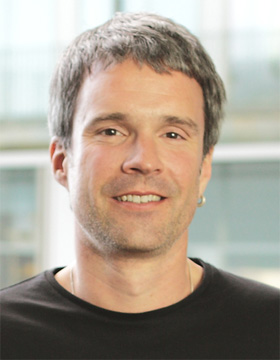 The Evolution of Regulatory Systems

All organisms differ from each other. But not in random ways. Some changes in the way we look, grow, or behave are more frequently observed than others. In fact, many imaginable biological shapes and processes never seem to occur at all. In many cases, we can explain this phenomenon by adaptation through natural selection: certain solutions simply work better than others in a given environment. But other instances are hard to explain. For example, why are there no six-limbed vertebrates with arms, legs, and wings? In other words, why are there no angels? It would be very advantageous to have an additional pair of limbs, wouldn't it? Indeed, insects show this sort of arrangement and seem to be very successful with it. The answers to these kinds of questions lie in the way our bodies are built, in the way we grow. But since the times of Darwin, we have made only modest progress in understanding how the complex processes of development from egg to adult shape and change the course of evolution. My research forms part of a discipline called evolutionary developmental biology that attempts to address these problems. We use a combination of experimental work - both genetic and molecular -, computer simulations, and mathematical analysis to study how genes influence the growth of different species of flies, and how the way these genes switch each other on or off during development changes the speed and direction of evolution in these insects. This sort of question lies at the very heart of modern biology. Understanding the non-random effects of random genetic changes is not only necessary to gain deeper insights into the development and evolution of animals and plants, but also to understand the causes and potential treatments of complex genetic disease. During my year at the Wiko, I will work on developing the mathematical and conceptual tools we need for the analysis of our computer models, and, more generally, for understanding the interplay between development and evolution.

The Process View of Life

I have always been fascinated by the astonishing diversity of biological forms, from the fluid shape of a single-celled amoeba, to the fractal beauty of shrubs and trees, to the colossal, colourful explosion of patterns in a coral reef. Nature seems inexhaustible in its ingenuity and inventiveness. And yet, there are regularities in this profusion of forms. Some patterning elements - body segments, appendages, stripes and spots, for example - occur frequently while others - such as wheel-shaped structures - are exceedingly rare. Why is this the case?

Biological form originates through two of the most intriguing and powerful processes in nature. The first, development or ontogenesis, shapes the organism and its life cycle on the trajectory from fertilised egg through childhood, adolescence, and maturity to death. The second, evolution or phylogenesis, alters those life cycles over many generations, adapting them to their respective environmental context, ultimately multiplying the number and kinds of organisms that inhabit our planet.

Both ontogenesis and phylogenesis are essential to account for the diversity of biological forms. On the one hand, evolution by natural selection culls forms that are unsuited for their environment and amplifies the frequencies of those that are well-adapted. On the other, the origin and range of forms that are selected can only be explained through development. What kinds of forms are possible, what kinds of forms can be selected at all, is determined by the ontogenetic processes that constitute life cycles. The nature of these processes and their role in evolution remain one of the deepest mysteries in biology today.

In my colloquium, I present an approach to unravel this mystery: biological structuralism. In contrast to currently dominant gene-centric views, it treats genes not as autonomous agents but as causal nodes embedded in the dynamic regulatory structure of development. It is both a philosophical perspective - considering process more fundamental than substance - and a practical scientific strategy - founded in the conceptual framework of dynamical systems theory. I will illustrate the power of structuralism with a seemingly simple but nevertheless archetypal example: the evolution of body patterning in flies. This example provides a small but meaningful glimpse into the complex and entangled generative processes that underlie the immense creative potential of life on Earth.

Modularity, criticality, and evolvability of a developmental gene regulatory network

Everything flows : a process perspective on life

The inheritance of process : a dynamical systems approach

Dynamic control of positional information in the early Drosophila embryo