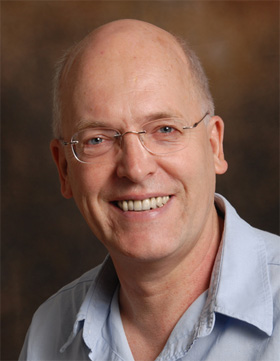 Distinguished Professor of Biocomplexity and Biochemistry

Born in 1953 in Durban, South Africa
Studied Biochemistry and Microbiology at Stellenbosch University

Fragile, yet Persistent: Self-Fabrication as the Key to Life

The question of what distinguishes living organisms from non-living objects, or, more poetically, what separates the quick from the dead, is a deep biological problem that has been central to my research of the last decade. My approach has been influenced by the work of Robert Rosen, Howard Pattee, John von Neumann, Humberto Maturana, Francisco Varela and Marcello Barbieri. In my view, the fundamental distinguishing feature of life is the ability of organisms to continuously make themselves: in order to persist despite the fragility of its components, the cell must be able to autonomously fabricate all of them.
I plan to write a monograph in which I trace the history of the concept of self-fabrication and provide a critique of the various models that claim to capture its essence, especially the proposed simulations of Rosen's metabolism-repair systems. The main aim of the book is to propose a new formal model of the living cell that incorporates three features that are generally accepted as necessary for life: a functional organisation that ensures self-fabrication, a molecular form of self-representation that can be copied, and an organic coding system that decodes the self-representation into functional cell components.
Cells use a single, conceptually straightforward chemical process - polymerisation - to create large, linear molecules that fold themselves into functional, three-dimensional structures that can self-assemble into higher-order structures. The question is whether the choice of sequence construction by concatenation has logical consequences for self-fabrication. To answer this, I have created a formal language based on a structural hierarchy of letters, words, sentences and paragraphs that are analogous to chemical elements, metabolites, macromolecules and macromolecular assemblies. With this linguistic model I can describe a formal system that has the ability to write its own production rules, making it, in Rosen's terms, closed to efficient causation and therefore self-fabricating. The internal logic of the model requires features that map onto phenomena such as protein folding and the unassisted self-assembly of macromolecular complexes, which I have argued are what makes life as we know it possible.

Self-fabrication: the art and rules for making oneself, from cells to language

We, the living, all do something astonishing that no non-living thing can do. Unlike, say, a car, which needs you or a mechanic to replace or repair its parts, we can make all our parts by ourselves. Whether we are bacterial, plant or animal, every single part in each of our cells is replaced or repaired, not from without but from within: cells are biochemical factories that uninterruptedly and autonomously fabricate and maintain themselves. Self-fabrication underlies all those properties so often used to define life: growth, metabolism, reproduction, development, adaptation, even evolution. It follows that without explaining self-fabrication we can explain neither life itself, nor its origin.

Is there a formal model for self-fabrication that resolves this conundrum? Indeed, there is and, in the main part of this talk, I will present it. It avoids the problems associated with earlier attempts, and builds on a fundamental and universal biochemical process, polymerization. Intriguingly, and in contrast to earlier models, I had to turn to a completely different subject area, linguistics, to build this model. It involves the creation of symbol strings in a formal language by production rules, which are themselves created from within the language. The beauty of this linguistic model of self-fabrication is not only that it maps perfectly onto cell biochemistry - as will be described - but that it also demonstrates that the problem of closure to efficient causation, the key to self-fabrication, can logically be solved in only one way, and that is the way that living things - all living things - do it.

Exploring the metabolic marketplace through the lens of systems biology

The biochemical factory that autonomously fabricates itself : a systems-biological view of the living cell

Regulating the cellular economy of supply and demand