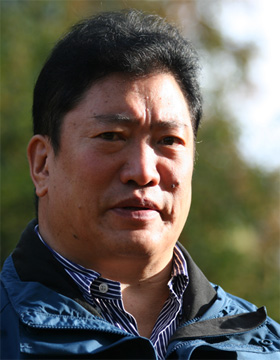 Institute of Religious Studies of the Tibet Academy of Social Sciences, Lhasa

During my stay at the Wissenschaftskolleg, I intend to work on the following:
1. Ethno-historical survey on the Buddhist cave temples of Guge (Western Tibet) and their mural paintings;
2. Several articles on the history of Western Tibet, 10th and 11th centuries (Zhang-zhung kingdom, Guge kingdom, Ladach Kingdom and Zang-kar kingdom);
3. Studies of folk customs (marriage song lyric, hunting culture, nomadic new year ceremony) and religion in Western Tibet.

The core area of the West Tibetan Buddhist Kingdom of Guge (10th-17th centuries CE) is located at the headwaters of the Sutlej, one of the major rivers originating in the western part of the Tibetan Highlands and flowing into the Indian subcontinent. Characteristic of this region is the rugged mountain landscape with numerous caves whose human use probably goes back to the Neolithic Era. From the beginning of the Guge Kingdom dozens of caves were established as Buddhist temples, some of which have meantime become known to a wider public through both Chinese and Western publications.

The partially preserved mural paintings are among the most important works of art relating to this Himalayan kingdom and the Buddhist world of the highlands in general. A few years ago I discovered five further cave temples from the 10th to 14th centuries in the remote district of Khartse (Pinnacle of the Fortress) with paintings of uniformly high artistic quality. These monuments are the focus of a book which I will conclude this year. Like all other religious institutions, construction of the cave temples of Khartse was a work commissioned by the political leadership. One of the questions that I ask in this context is what possible political purpose was served by these religious monuments, for they were established in a place that is difficult to access, virtually hidden away from the outside world. I postulate that the answer to this question leads us to the core mechanisms of a medieval form of sovereignty that was entirely determined by religion.

In its first part the work report includes a few remarks on the older historical geography of western Tibet, in particular the mysterious Zhangzhung, a kingdom that reportedly existed long before the Tibetan Empire and with a fabulous geography extending over the western and northern highlands. A new textual source that we have read within the framework of the Focus Group Tibetan Genealogies at Wiko provides important information on the genealogy and actual extension of this principality whose heartland was apparently more or less identical to the later Guge. One mundane feature that the two kingdoms shared was their wealth of gold, one of the old gold mines being located in the cave area of Khartse.

Rulers on the celestial plain : ecclesiastic and secular hegemony in medieval Tibet ; a study of Tshal Gung-thang Denkschriften ; 361