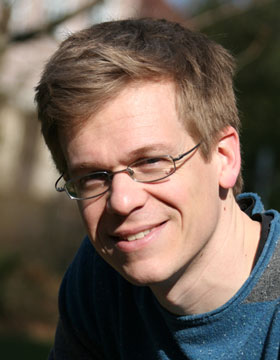 Born in 1980 in Veldhoven, Netherlands
Studied Computer Science at the Technische Universiteit Eindhoven

The Evolution of Genome Structure and Its Regulation

At the Wiko, my aim is to lay the foundation for my future research as an independent investigator. The main theme in my research has always been the dynamics of evolution, especially with respect to the genome, and the regulation of genes. Previously, I used conceptual models of in silico evolution to study the evolution of genome structure and gene regulatory networks under changing environmental conditions. Lately I have focused on a developmental gene regulatory network and its expression patterns in fly embryos. These were data-driven studies, where gene networks inferred from experimental data were used to study the evolution of body plan patterning. During my stay in Berlin, I will focus on exciting new findings about how the genome folds in the cell nucleus. The idea is to look from an evolutionary point of view at this "new" folded genome and its interactions with the nuclear and cellular environment. I will explore several lines of inquiry, ranging from developing conceptual models to bioinformatic data analysis.
First of all, in the in silico evolution community there is a rich history of conceptual models to study evolutionary processes under various conditions. I aim to develop novel models that incorporate genome folding. These models should allow for the data-driven investigation of concepts such as robustness, evolvability, and modularity.
Second, only recently have we started to answer on a large scale the question of which proteins shape and regulate the DNA-protein complex called chromatin. At the moment, these proteins appear related only by their nuclear location; their (co-)evolution is an open question. My idea is to develop a pilot project in which I use bioinformatic data analysis to study the evolution of chromatin-associated proteins.
Finally, I would like to focus on the role of selfish genetic elements. There is a long evolutionary history between genomes and these parasitic (or mutualistic) self-copying elements. For instance, selfish elements are known to shape gene regulatory networks by spreading enhancer elements through the genome. The evolutionary dynamics and the implications for genome folding and gene regulation present an interesting basis for discussion and collaboration with other Fellows.