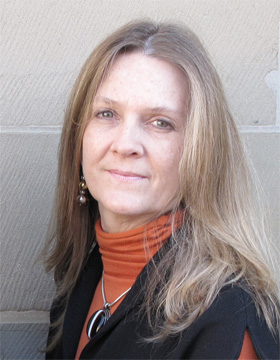 Born in 1957 in Johannesburg, South Africa
Studied Fine Art at the University of Cape Town

Bone Books and the Special Mission of Louis Anthing

During this fellowship I will be working on a book that will be written, literally, on the skeletons of two adolescent giraffes, both of which died in the Northern Cape in South Africa. The idea of writing a book on giraffe skeletons (not the conventional outcome for a research endeavour) indicates, for me, a productive range of creative and artistic explorations about the archive and the nature of a book and of reading. In particular, my giraffe book project in its practice will embody a history of transcription, illuminated manuscripts and the "artist's book".
While mine is an artist's project, I am also deeply engaged with the history of the /xam (or the Cape Bushmen) in South Africa, and with the archive of that history. The subject of my book is the archive of letters written to the Cape Parliament in the 1860s by special magistrate Louis Anthing, a man driven by a sense of justice to document the last phase of the genocide of the /xam on the northern frontier of the Cape Colony (now the Northern Cape). At this time, Boers (Dutch colonial farmers) were exterminating the Bushmen, along with the herds of antelope of all species, the rabbits and the birds that inhabited the country's interior. Whole species were rendered extinct as the Boers shot their way through to the north. Those Bushmen who were not killed, or taken into forced labour, were literally starving to death in a parched and increasingly ravaged environment. Today hundreds of letters written by Anthing survive in the Cape Archive and record the devastating stories of individual lives and families that were caught up in this genocide. These letters, along with other material from the massacre sites (including reference to big game hunters now shooting animals bred for the purpose on the same land) will inform this project.
Anthing's mission intersected with the work of German-born philologist Wilhelm Bleek and English-born Lucy Lloyd, both of whom lived in Cape Town, South Africa in the second half of the 19th century. Bleek and Lloyd's extensive interviews with /xam prisoners arrested for resisting colonial brutality have been the subject of several of my other books and artworks. In working in Berlin, I am mindful of both Bleek's early years in this city, and the time one hundred years ago when Lucy Lloyd lived in Charlottenburg and was completing her own book, Specimens of Bushman Folklore.

Bone Books and the /xam

This presentation is (as is much of the work I have done over the past two decades) a tribute to a remarkable woman Lucy Catherine Lloyd, who left England for Natal as a young girl and who died and was buried in Cape Town, leaving the archive she had created and which would one day be identified as a United Nations site of the Memory of the World. She had lost her mother at a young age and was eventually evicted from her home in Natal by her father when she resisted his appropriation of her small inheritance. Living alone in colonial Natal, she was tormented by self-doubt and the feeling that she was plain and dull and stupid. She was to know, not least, the unhappiness of a failed engagement and the death of her fiancé for which she blamed herself. She was shipwrecked, yet survived to share a home with not only her sister and brother-in-law, the philologist Wilhelm Bleek, but, over a period of 15 years, with various convicts, outlaws and families of /xam, !kun and Kora and record their language and stories. For 80 years after her death her work was largely unacknowledged and when it was referred to it was attributed to her brother-in-law. Yet she rescued, not only for South Africa but for everyone, a language which, in a sense more than just poetic, could be argued to be the oldest known in the world. More than this, she recorded in a vast archive, the stories and ideas that, as Bleek once said, "most moved the Bushman mind and filled it with religious feeling". That she did this in a colonial environment where the Bushman were viewed as the lowest form of humanity, and that was equally antithetical to scholarship of women, is all the more remarkable.

In this presentation I introduce the Bleek and Lloyd Archive and two of its main contributors, Dia!kwain and //kabbo, /xam speakers who wanted their stories to become known by way of books. I also introduce Louis Anthing who documented the final years of the genocide of the |xam and whose "special mission", I suggest, helped facilitate the Bleek and Lloyd Archive. I then attempt to show how a popular exhibit in Cape Town assisted me in thinking about my own creative responses to the archive and the two giraffe books that are my project at the Wiko.

Fugitive archive : a response to the ‘Bushman Diorama’

Claim to the country : the archive of Lucy Lloyd and Wilhelm Bleek The digital Bleek and Lloyd