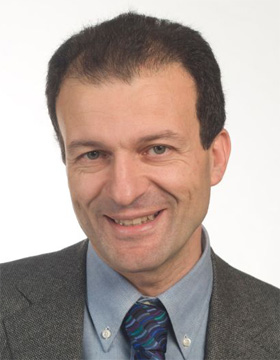 Professor of Romance Linguistics with a particular focus on Historical Linguistics

Born in 1963 in Rome
Studied Historical and General Linguistics and Romance Philology at the Università di Pisa, the Scuola Normale Superiore di Pisa and the Universität Wien

Everybody knows that languages like Spanish, French and Italian have two grammatical genders, contrasting e.g. Sp. el chico vs. la chica "the boy/the girl", while it is uncontroversial that their common ancestor, Latin, had three genders, with a neuter alongside masculine and feminine. Obviously, things have changed here, and my project aims at providing a book-length account of how this may have happened and of what this can tell us for general linguistic theory.
A key point to this account is a comprehensive analysis of how gender works in lesser-known non-standard dialects, which hold many surprises in store for those who only know the major standard languages. To mention just three examples, there are a) dialects in which "wives" are masculine; b) dialects in which "husbands" are neuter, like, say, "eggs" or "knees", contrasting with masculine "dogs" and feminine "hands"; and c) dialects in which "rabbits" are assigned different genders depending on whether they are dead or alive.
This sort of data is crucial for both synchronic analysis and diachronic reconstruction. Synchronically, while it is true that grammatical gender (also) serves the function of helping speakers to organize the world (i.e. to classify the referents of the linguistic signs they employ in communication: say, male vs. female animate beings), evidence such as (a)-(b) defies any description in terms of world taxonomies, semantic plausibility etc., and calls for an account in terms of formal properties of the (classes of) words involved.
As for diachrony, evidence from systems such as (b)-(c) proves instrumental for reconstructing what happened to the Latin neuter: one of the unexpected results of this novel reconstruction is that the Romance language family must have gone through a transitional four-gender stage, not too different from gender systems observed in "exotic" languages such as, say, Burushaski (a language isolate spoken in the Karakoram region in Pakistan) or Worora (a non-Pama-Nyungan language of North-Western Australia).

Lost in Romance? The fate of the Latin neuter and what it tells us about the category "gender"

Modern Romance languages like French, Spanish and Italian have two grammatical genders (masculine vs. feminine), whereas Latin had three (masculine, feminine and neuter). The standard account of change in the gender system from Latin to its daughter languages is that this reduction from three to two happened very early on, via the demise of the neuter, already in late Latin/Proto-Romance, i.e. prior to the differentiation of the individual Romance languages.

The book project I am presently working on aims at retelling this story, showing that the current handbook account cannot be maintained. Crucial evidence for this claim is provided by the demonstration that a) several Romance varieties preserve to this day a more complex gender system than the binary one found in the better-known standard languages mentioned at the outset; and that b) within such more complex systems, one gender, or even two, go back to the Latin neuter in a straight line, in spite of recurrent claims to the contrary.

There are reasons, concerning both method and the research object, to hope that this specific case study in historical Romance linguistics may be of interest to a broader audience. On the one hand, in a discipline-internal perspective, gender is one of the most nuanced and stratified topics one can think of within linguistics, as its analysis requires expertise in all components of language structure, from phonology, morphology and syntax to semantics and the lexicon: thus, it is a suitable topic for a demo about how linguistics operates iuxta propria principia.

On the other hand, in a wider perspective, one may mention that gender is dealt with, in one way or other, in studies in other fields, from cognitive neuropsychology to sociology and history (gender studies): it thus provides an example of a topic for which linguistic expertise may be relevant for interdisciplinary endeavours.

The dialects of central Italy