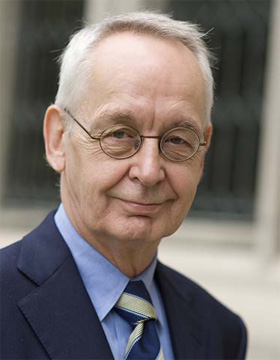 Born in 1936 in Berlin
Studied Islamic Studies, Sociology and Law at the Freie Universität Berlin

A Muslim Debate on Human Nature

Muslim grammarians and theologians discuss - from the 9th century on - whether God instituted human language or whether humans had to develop their own language in order to be able to receive God's revelation. The first position underlines God's authority over thought and language, the second one defends human creativity. This debate continued for many centuries, establishing a licit framework for the recognition of humans' capacity to shape their history.
Ibn 'Aqil (d. 1119) - the leading Hanbali scholar in Baghdad - transferred this debate into the analysis of law and history. He accepted God's role in instituting human language but pointed out that words get their meaning in communication between speakers who share common experiences. Communication being the essential purpose of language and the conditio sine qua non for human cooperation is necessary for human survival. As this cooperation constantly produces new tools, new forms of goods, new forms of their use, new forms of urban life, of music and esthetics, and new legal norms for life in a changing environment, the historical process has to be understood as a constant process of innovation (tajdid). Language has to express the innovations brought about by the historical process, and words acquire multiple meanings based on experiences in a changing human environment. Communication requires new levels of abstraction, such as metaphors. The human development driven by need constantly brings about the coinage of new words and the assignment of new meanings to old expressions. Therefore - Ibn 'Aqil concludes - speculative reasoning (nazar) is a legal obligation for those capable of it whenever they face situations brought about by the process of innovation that cannot satisfactorily be resolved within the available forms of knowledge. A religiously justified notion of progress is clearly implied in Ibn 'Aqil's reasoning.
During my stay at the Wissenschaftskolleg I intend to translate the most important texts of Ibn 'Aqil on these questions and to establish the intellectual genealogy through which elements of Classical Antiquity's discussion of human nature (e.g. Aristotle and Cicero on Natural Law) were integrated in and adapted to the Muslim debate. The results will be part of a book on human nature and innovation in Islamic Law that I hope to finish during my sabbatical year (2013-14).

The Right to Dissent: a Fundamental Construction Principle of Islamic Jurisprudence

The lecture is based on three (hypo-)theses:

1- The right to dissent is an indispensable (even if not a sufficient) condition for any rational debate that wants to integrate different experiences and view-points into a legal discourse;

2- If dissent takes place in a debate about legal norms that are supposed to guarantee the good life of those who submit to them, it needs a normative foundation by which the dissenting parties can justify their divergent positions without leaving the common ground with their community;

3- Dissenting positions will, therefore, become part of a larger unit - the law - of which they are considered to be constituent parts, different interpretations of a common foundation of the law. The law thus constituted will be a pluralistic normative system in which the history of dissent is understood as the unfolding of the law.

My lecture will focus on the relations between the four Sunni schools of law that survived the 13th century. It will follow the historical development of the Islamic jurisprudence (fiqh).

In the eighth and the ninth centuries, law was developed by private scholars not by religious institutions or governments. Their students formed schools of law and the distinctions between the schools were based on the doctrinal dissent between them even over principal sources of the law. The legal literature of the tenth and the eleventh centuries gives ample room for the discussion of these doctrinal distinctions. Public disputations (munazarat) among scholars made dissent an embodied practice of scholastic intellectual struggle. The emergence, from the tenth century on, of a new discipline, the - roots of the jurisprudence - (usul al al-fiqh) helped to provide rational analyses of dissent as the licit outcome of the efforts of independent and highly qualified scholars. I will discuss in some detail the scope of dissent on individual and collective rights that developed in the literature on Islamic jurisprudence.

At the end of the eleventh and the beginning of the twelfth century, theologians such as al-Ghazali try to develop an epistemology of the applied law that distinguishes it from theology and justifies the dissent among the jurists as the necessary result of the fact that law is not a discipline based on rational proof and that many of its norms are not based on revelation but on the decisions of the jurists that follow their own temperaments. Ghazali develops a new and pluralistic concept that he called "the purposes of the law [sharia]," an a priori system of five purposes that justify all legal solutions that help to realize them. This notion of "the purposes of the sharia" has influenced the work of individual scholars in the period between the 12th and the 19th century. But it has lived through a renaissance in the 20th and the 21st century in the jurisprudence of major courts and the reformist literature of modernist authors throughout the Muslim World.

I will end with a few words about the reasons for this modern development.

The invisibility of paternal filiation : the power of institutions versus scientific proof in Roman and Muslim law

Invisibility and power in Islamic religion and culture : the ambiguity of veiling

The changing limits of contingency in the history of Muslim law

Contingency in a sacred law : legal and ethical norms in the Muslim fiqh Studies in Islamic law and society ; 7