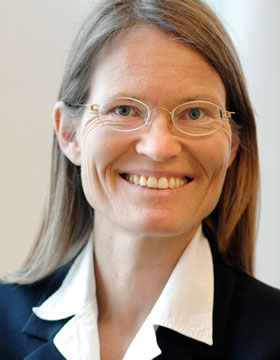 Professor of International and Constitutional Law

Born in 1964 in Berlin
Studied Law, Modern Greek, and Spanish Literature and Language at the Universities of Würzburg, Lausanne, and Freiburg/Breisgau and at Harvard Law School

Animalité, égalité, fraternité
Between 1879 and 1935, the Basel public was entertained with "Völkerschauen" (ethnic exhibitions) in the Basel Zoo. In these shows, mostly non-European persons were displayed, equipped with (makeshift) huts and dressed in their traditional clothing. These shows clearly attracted more visitors to the Zoo than the non-human animals.
The project starts from the shock that is felt when learning about this display of humans in zoos, which was not so long ago, and the ensuing reflection on why this apparently was not shocking 75 years ago (just as most people have no problem with animals in zoos today) and why we do not question showing animals in zoos. The starting point is thus the recognition of, first, the great mutability of societal attitudes about human dignity, and, second, the clearly diverging societal attitudes towards human and non-human animals.

Photo: Andreas-Zimmermann
The latter divergence is reflected in a strikingly disparate state of both domestic and international law. Today a very extensive body of international human rights law contrasts with an almost total lack of international regulations concerning animal welfare. This contrast calls for a (juridical, but also political and sociological) explanation (positive analysis) and also for normative suggestions for filling what I perceive as a lacuna.
The project seeks to furnish both explanations and reform proposals through a comparison of the legal discourse on international human rights (from the 1920s until the present) with the political-legal discourse on animal welfare and rights that began to flourish in the 19th century, mainly in Europe.
Method: I will analyze ideas, arguments, and discourse (reflection), social movements (action), and the product of both, the legal norms (codification).
The main academic discipline is international law (and comparative law), but the project necessarily involves history, philosophy, and political science and needs insights from philosophical anthropology and zoology.

Exposition: Between 1879 and 1935, the Basel public was entertained with Völkerschauen (peoples' shows) in the Basel Zoo. My project starts from the shock we feel when learning about the not-so-long-ago display of humans in zoos, and the dual follow-up reflection about why this was apparently not shocking 75 years ago and why we do not question the showing of animals in zoos today. The starting point thus is the recognition of, first, a high dynamism in societal attitudes toward human dignity and, second, of diverging societal attitudes towards human and non-human animals.
These different attitudes are reflected in strikingly diverging states of the law. Today an extensive body of national and international human rights law contrasts with a regulatory deficit concerning animal welfare, although notably European polities (states, the EU and the Council of Europe) have, especially since the 1980s, adopted legal norms on the treatment of animals (species protection, transport, slaughter, livestock conditions, pets) and are continuously raising the standards. This contrast calls for a comparative study of the two legal fields.

Methods: This research is conducted in two dimensions. The first is the sociological/cultural/discursive/empirical dimension in which legal processes are observed from the outside. The question here is: How does (international) law evolve? Attention is paid to actors (lawyers, public, business etc.); 'ideational' factors ((1) ideals/ beliefs/principles; (2) interests /preferences/habits; (3) scientific knowledge), and finally primarily 'material' factors (economic incentives; path dependence, interdependency, globalization, competition for business sites etc.).
The second dimension is the doctrinal/systematic analysis, conducted with juridical methods 'proper', so to speak, within the legal system. The questions here are: Which legal arguments have been made? And which should be made?
My self-understanding as a legal scholar is that I am neither a law-making politician nor a neutral/apolitical/value-free technician. Complete Wertfreiheit is neither possible nor desirable; legal scholarship inevitably has normative components, is inevitably (at least indirectly) 'applied science'; and therefore every legal scholar bears a social responsibility.

Select aspects of the comparison between human rights law and animal welfare law:

A. Entrenching exploitation, discrimination and extermination through the law
- Strategies of 'othering' persons (Africans, Jews, indigenous people; animals) as a justification for oppression.
- Arguments of property and privacy.
- Arguments from 'nature': Do they ('Negroes', animals...) feel pain, communicate, love their children, etc.? Which differences/commonalities are morally relevant, and how should this be reflected by the law?

B. Ending exploitation, discrimination and extermination through the law
I. Doctrinal analysis:
- Rights-holders versus beneficiaries (only welfarism and ethics of care).
- Combatting racism, sexism, speciesism. Expanding the legal community through application of the principles of non-discrimination and equal protection (women, blacks, children, handicapped, aliens, great apes... ).
II. Empirical/cultural/sociological analysis:
- The stalling power of business (slavery; contemporary labour and social rights; animals).
- The power of empathy, emotions, moral outrage.
- The power of publicity and transparency.
- The gender of the discipline and practice.

Global animal law : what it is and why we need it

Prospects and limits of a global history of international law : a brief rejoinder