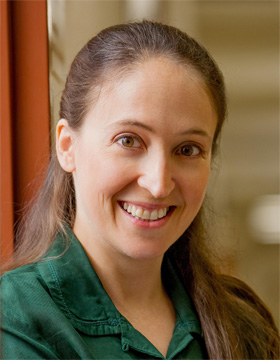 I am a theoretical biologist. Most of my recent work uses theoretical population genetics and bioinformatics approaches to study the robustness and evolvability of biological systems. Molecular and developmental errors in the present (e.g. skipping a stop codon during translation of a gene into a protein) can mimic the effects of mutations in the future (e.g. a mutation that destroys a stop codon). Selection for genotypes that are more robust to such errors leads to the evolution of genotypes that are more able to tolerate dramatic mutational changes. These genotypes are preadapted and highly evolvable.
My major sabbatical project is to take a break from this work in order to write an accessible book for a crossover audience, using the perspective of evolutionary biology to provide insights into economics. The central theme is the tension between zero sum and non-zero sum competitions (as they are known in economics), which parallels the tension in evolution between relative and absolute fitness, or between soft and hard selection.
I will first examine the tension between money and wealth. Saving money for retirement is a good strategy for an individual, but is a zero sum game within a population, unless that money is successfully invested to become true wealth. Originally, wealth consisted of stores of grain, livestock, and tools: these items are genuinely useful in the future. They are not simply tokens that can be exchanged for food later because others want them. Today, more important stores of wealth include the creation and improvement of infrastructure, such as roads and power plants, and of effective institutions, including private, governmental, or non-profit organizations. As the baby boomers retire, it will become apparent how much of the money "invested" in their pension schemes has been converted into true wealth, and how much has simply inflated asset prices. Reviewing ways of storing wealth, I will conclude that human capital is a large, essential part of the solution.
I will then consider how the signaling function and the human capital function of the education system can be in conflict. In other words, when students aim to get an "A", this is not the same as students aiming to learn something. Finally, I will consider factors that affect the outcome of this conflict, and will conclude with recommendations for society. For example, there is usually a tradeoff between precision and accuracy. Students and instructors can be evaluated more accurately if society is willing to forego precision. I will describe how such evaluations may be conducted.

Saving for retirement: The accumulation of capital and how competition works

Following some very abstract mathematical work in evolutionary biology, I became attuned to everyday statements that inappropriately generalize from the interests of any one individual to the interests of a group containing many such individuals. This distinction exists in biology (relative and absolute fitness), game theory (zero-sum and non-zero-sum games) and economics (positional and non-positional goods).

In daily discourse, I noticed two common claims with profound social and political implications. First, that "everybody should save more for their retirement", and second that "everybody should go to university". I believe these two claims confuse relative competitions with absolute ones. This realization eventually led me to the Wissenschaftskolleg to write a popular book to debunk these statements.

One baby boomer who saves more than the others will retire in comfort. If everybody saves more, then we will see a demographic boom in the price of financial assets as the baby boomers reach retirement, and a collapse in prices after they need the money and start selling. The savings will only help insofar as we become much better at finding new productive ways to spend the saved money on things of enduring value. People confuse financial assets, which are a relative good, with productive investment activity in the real economy, which is absolute.

Employers like to hire university graduates even for positions that have nothing to do with what was studied. We would like to think that this is due to general, transferrable skills learned at university. But education may simply be what both economists and biologists call an "honest costly signal". People who make good employees also make good students. Employers therefore like to hire good students, even if they learned nothing useful during their degree. Going to university helps one individual show their talent to employers, and get a good job. Everybody going to university simply raises the bar needed to stand out as a "good student", with little benefit to society.

Clearly, it would be good for society if more competition were absolute rather than relative. I propose one simple principle for achieving this. There is a unresolvable tension in any measurement system between precision and accuracy. High precision favors relative competitions, while high accuracy favors absolute competitions. I will use this principle to propose radical changes to finance and education. These two areas are closely connected, because the biggest potential for productive investment today is in human capital.

Predicting patterns of long-term adaptation and extinction with population genetics

Change, purpose, and progress in evolution and christianity

A clean partition of "fitness" into three incommensurable dimension : growth, efficiency, and competitiveness

Compensatory evolution and the origins of innovations