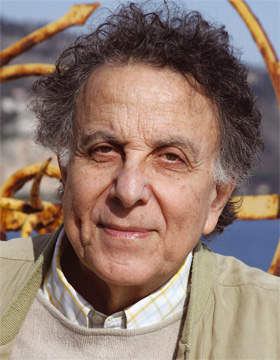 During my residency at the Wissenschaftskolleg zu Berlin, I would like to create a series of abstract paintings drawing upon the visual perception of transparency and simultaneously to write my observations on the subject. Through its abstract rendering, each composition would seek to embody the tactile experience of perceiving transparency and the breathing of life into the materialization of imagined space.
Venturing in such an undertaking should obviously raise many questions. How can mere layers of acrylic paint assuming geometric forms composed on a flat surface seduce the viewer the way transparency in clothing seduces the onlooker's eye? Can transparency in an abstract painting reveal a form's volume, the way transparency of a thin-pleated skirt in the statue of a Greek Goddess defines the volume of her body in marble? When a painting is not a mimetic representation of nature, can its transparencies allude to a metaphor as does Debussy's La Mer, which is not a depiction of the sea but a metaphor of sea-ness?
Some of these questions might be answered through painting. Others might only be contemplated through writing.

After completing a series of geometrically abstract paintings focusing on the subject of transparency and spatial ambiguity, this presentation is an attempt to describe not what the paintings lead to but where the paintings come from. Such retrospection, however, is only an invitation to the viewer's eyes to feast upon what had been stored over the years before the paintings came into being.

Albert Camus summed up the process like this: "I know with certainty that a mans work is nothing but the journey to recover, through the detour of art, the two or three simple and great images which first gained access to his heart."

Having been born and raised in Jerusalem, I hope that recovery of the two or three simple and great images that first gained access to my heart will lead the viewer to investigate the implications of composition and the quest for transparency in my art.

Between Exits : paintings by Hani Zurob

To measure Jerusalem : explorations of the square