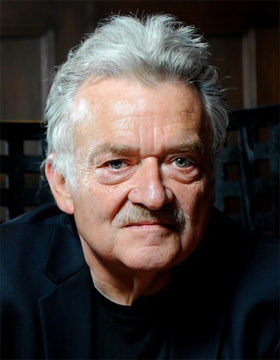 A conventional way of describing this project would start out with the still-existing canon of the French and European Enlightenment. Without a doubt, Voltaire, Diderot, and Rousseau are the three most frequently mentioned protagonists of the French Enlightenment - and the importance of the work that each of them produced is considered to be such that European Enlightenment is hard to imagine without all three of them. Now, within this canon crystallization, the most central, most typical, and therefore perhaps least provocative character is Voltaire, whose thought and writing stand for "rationality", and who participated in all kinds of movements and projects that we associate with that foundational historical period. Rousseau, by contrast, is much less "representative", much more critical of his own time (and of certain dynamics of the Enlightenment) - which is why Rousseau is today often considered to be the most "profound" of the Enlightenment philosophers. Clearly, Diderot's position in this canon is "in between", but an in-between that could never be associated with "mediation" (for example, a "mediation" between the positions of Voltaire and Rousseau). Diderot, for his part, is of course "central" in a different, almost institutional way - as the mastermind behind the project of the 18th-century "Encyclopédie" (and as the one protagonist who had the stamina to finish that gigantic project). But the Diderot that will interest me - and for whose characterization and understanding I believe that the discursive form of biography is particularly promising - is the Diderot who was so impressed with the (from our perspective: productive) shortcomings, excesses, and explosions of the Enlightenment (and here I quote the title of a compact seminar that I will teach at Weimar/Jena in June 2011). Diderot, for example, was intellectually obsessed with the question whether and how the human organs of perception might (or might not) be able to provide us with an adequate representation of the material world surrounding us. More than anyone in his time, perhaps, Diderot resisted the general flow of "modernity", in the sense of a growing spiritualization and a growing abstraction in human relationship to the world of objects. How this fascination could turn, almost literally, into an "explosion of Enlightenment", can be seen in Diderot's fabulous (but not widely-read) text on the "Rêve d'Alembert", a fictional narrative in which he explodes the boundary between abstract world-description, on the one hand, and, on the other, an exclusively sensual ("erotic" and "material") relationship to the world. This "materialistic" and "erotic" relationship to the things of the world seems to circumscribe what is most interesting in Diderot's work and in Diderot's life for us in the early 21st century. At the same time, I believe that this "relationship to things of the world" is not only largely motivated by Diderot's reaction to his contemporary epistemology; it is also a productive obsession that we understand best if we approach it biographically - for example (and this is a stage of my work to which I am particularly looking forward), through the months of Diderot's visit to St. Petersburg, under the protection of Catherine the Great.

Who Was Denis Diderot - and What Can He Be For Us?

The book about Denis Diderot that is slowly shaping up in my mind refers and reacts to a critique of [mainly] 18th century Enlightenment as it has come together in a standard configuration over the past decades. For apparently good reasons, this configuration accuses the normative self-reference that we derive from Enlightenment for a lack of concreteness, of sensuality, and of openness towards the world of objects, enhancing thus the question of whether the "process of modernity," as a process of "disenchantment," has not gone several steps too far [so that "rational re-enchantment" could become a key cultural and even political challenge of our present]. I believe [and will try to argue] that [a], rather than a critique of certain shortcomings, these concerns are the result of a profound change in the perspective from which we have seen "Enlightenment" and that [b] this change of perspective goes back to the emergence of a new "construction of time" ["chronotope"] which, since the mid-20th century, has replaced the construction of time that we used to call "historical."

In our own, new cultural and intellectual present, in the present of a transformed chronotope, more than criticizing and even replacing Enlightenment values, we have come to long for a different Enlightenment, that is a less deductive and more obsessive Enlightenment [among other things], a cultural dimension to which I am [metaphorically] referring as Enlightenment's "explosions and excess[es]." We thus begin to see an Enlightenment which, more than ever before, may give to Denis Diderot and his work the status of its most appealing embodiment and unfolding -- after Voltaire for the 19th and Rousseau for the 20th centuries. It is this Diderot of world-openness and materialism, of aesthetic enthusiasm, sensuality and occasional [for us] bad taste, that I want to understand, embrace, and celebrate.

In my presentation, I would like to discuss, as a "discursive" [I prefer to say: as a writerly] problem, the question of how this goal can best be achieved. More precisely: if biography seems to be an appropriate framework bringing together manifold dimensions of Diderot's times and texts [although, compared to Voltaire and Rousseau, his life was perhaps short of dramatic moments and turnarounds], there is an obvious tension between the subgenre of scholarly biography that presents persons from the past as allegories of normative roles ["what Diderot can be for us"] and. on the other hand, the concreteness, the living-in-the-present which, almost suddenly, have made Diderot so appealing for us [or at least for me]. How can I engage, for example, with Diderot's obsession regarding the question what a perfect day might be like; how can I allude to a waning erotic tension that one can sense, late in their lives, throughout the conversations between Catherine the Great of Russia and Diderot; how can I indulge in finding out "who Denis Diderot was" -- and still write a book that has more intellectual punch than the typical ["cute"] neo-historicist monograph?

What is life? : the intellectual pertinence of Erwin Schrödinger Geist und Materie <engl.>